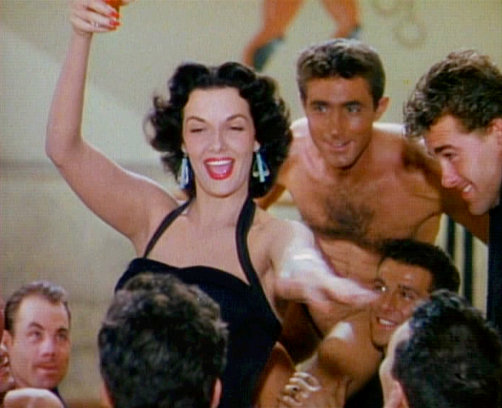 I’m a musicals geek. If you are too, this post will probably tell you nothing you don’t already know. But if not, I would like to present four examples of interesting, funny and – in my opinion – feminist portrayals of women in musicals. Disclaimer: I tend to focus on things I like rather than things I don’t, so the following list is very much the positive aspects of the musicals I’m discussing, of which there are also problematic aspects (e.g. the character of likeable-yet-dowdy Lucy in On the Town).

Doris Day stars as the titular cowgirl, one of the guys, who is persuaded to try wearing a dress and tidy her house up, winning her a man. Horribly conventional? It’s a lot less so than it sounds. At the end of the film she’s still exactly the same person as she was at the start: straight-shooting, rough, utterly self-sufficient. She’s just added dress-wearing and house-tidying to her list of skills. In addition, the person who persuades her to change (some of) her ways is her new friend the showgirl Katie, and the relationship between the two is startlingly – well, romantic. An overtly lesbian remake is very much called for.

Three sailors spend 24 hours in New York and each find a girl. But in fact, in two out of the three cases, the girl finds them – and the two girls in question are a paleontologist and a taxi driver. (Sailor: “Why are you still driving a cab? The war’s over.” Brunhilde, flirtatiously: “I never give up anything I like.”) The three female leads all get stories and backstories (unlike the sailors); they all get songs, and they talk to each other. I like to think that after the sailors have departed, they all stay friends. And they save the day, too, talking the cops out of arresting their boys.

My favourite performance from On the Town, incidentally, isn’t in the film at all. It’s the fantastic jazz singer/comedian Lea deLaria singing “I Can Cook, Too” from the stage version:

Showgirls Lorelei and Dorothy (Marilyn Monroe and Jane Russell) go on a cruise so Lorelei can marry a millionaire. This is one of my favourite portrayals of female friendship: the affectionate, mutually mocking relationship between the two leads is really the core of the film, with the men orbiting around them. Dorothy lusts after the swim team and falls for a detective; Lorelei pursues a diamond tiara but is genuinely fond of the shy millionaire she’s travelling to marry. Stranded in Paris with no money, they become stars of the show all over again. Yes, the film ends with both of them getting married, but I suspect both husbands are looking at a lifetime of minding the kids while the girls put on fabulous outfits and hit the town.

Abandoned by his former dance partner, Don (Fred Astaire) drunkenly enlists Hannah (Judy Garland) as her replacement to prove that he can turn anyone into his sidekick; in the end, though, it’s she who changes him. The story is mainly told from Hannah’s viewpoint, allowing us to wince as she tries to be the graceful, feminine dancer Don thinks he wants, and ends up making him realise he’s the one limiting them both. After the standard misunderstandings, she solves things by sending Don flowers and turning up to take him out on a date, in a direct role reversal of the usual romantic ending. She gets the final song, too: Easter Parade, of course.

I love one early scene especially. Don, wondering if Hannah is beautiful enough to attract the punters, tells her to walk in front of him so he can see if men turn to look at her on the street. They do, and he’s satisfied. But we can see that the reason she’s getting those smiles from the men is that she’s pulling a silly face at them. It’s a perfect way to make fun of simplistic male expectations of what women should be, and look, like. It’s also, by the way, ideal ammunition for anyone who wants to rebut the allegation that women aren’t funny.

The scene illustrates for me why musicals are often so great at strong female leads. Musicals thrive on eccentric, flamboyant and funny characters, which benefits the women as well as the men. And because all the leads will be given a song, and therefore a voice, the female lead isn’t likely to be passive or mysterious. She isn’t over there being gazed at; she’s up close, telling you how she feels, and quite possibly making you laugh at the same time. It’s very refreshing.