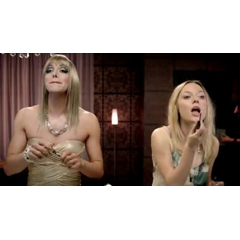 A television commercial for Libra tampons has generated a storm of controversy across numerous social networking sites. The advert depicts two women in a nightclub restroom engaging in a non-verbal competition while putting on makeup, which ends when one woman produces her Libra tampon, at which point the other woman leaves, apparently having ‘lost’ the competition because she doesn’t need or use tampons.

Much of the outrage I’ve seen has been at the depiction of one of the pair as being a caricature of transsexual/transgender (TS/TG) women and, while I empathise with that point of view, I also think that believing the ad to be transphobic and nothing more (or less) overlooks that its depiction of women generally plays on some very sexist stereotypes which are comprehensively offensive, whether you’re a TS/TG or cis woman.

The transphobia seems to me to arise from the use of a combination of two timeworn (and, in some circles, long-discredited) tropes: first, the essentialist view that TS/TG women are always the gender assigned at birth and it doesn’t matter how you change your external appearance, be it with cosmetics or even major abdominal surgery, you cannot change what’s on the inside. The second, related, subtext is the idea that TS/TG women are really just ‘men in dresses’ and it’s a stereotype which the ad hammers home without a shred of subtlety.

But to my mind, where the ad extends its offensiveness beyond transphobia, is in its reinforcement of the frankly naive and negative stereotypes that women are defined by their gender presentation and their reproductive capabilities. In my opinion, the insinuation that you are somehow more of a woman if you conform to patriarchal norms of how women should present themselves, with the further suggestion that you are not a “real” woman and some sort of ‘loser’ if you don’t menstruate, is not only offensive to all women, TS/TG or cis, but it’s also an insult to our intelligence as feminists.

ETA: Via Stuff.co.nz, I note that Libra has apologised and withdrawn the ad. Thanks to Stephanie for the heads-up.