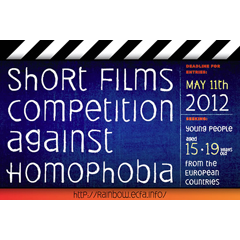 The films, up to 10 minutes, must enter one of the following 3 the categories:

In one of these two different issues about sexual orientation and gender diversity:

1. Surroundings: being gay, lesbian, transgender or bisexual at school, in the family or in sports

2. Relationships: me and my friends

(The films must be delivered by May 11th)

The film should correspond to one of the given categories and send to:

The Rainbow Project team will appoint an international jury – involving experts and LGBT professionals connected to the Milano Mix Festival – Gay and lesbian cinema and queer culture that will award a weekend for 2 people in a European city (flight and accommodation in hotel 3* BB) for the 2 best movies.

The winning films and a selection of the films participating (shortlisted films) will be screened at the 26th Milano MIX Festival – Gay and lesbian cinema and queer culture, in Milan, Italy, June 2012 and in other festivals organised by partners of the Rainbow Project.

Film submission form and competition guidelines can be downloaded at the website: