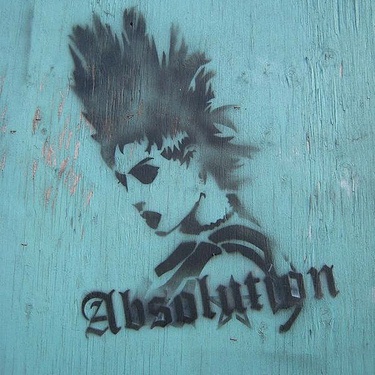 It’s a great pleasure to be given the chance to be a guest blogger here at the F-Word. In order to give you some idea of what I’m like, I thought that I’d make my first post here a short introduction to the music that’s influenced me throughout my life.

Thanks to my mum, I grew up listening to the punk of the 70s and 80s. There were few very popular female bands (as shown by this F-Word series on the subject), but the ones we did listen to have stuck with me until now. My favourite of these were X-Ray Spex.

Although X-Ray Spex only released one album, Germ Free Adolescents, they managed to pack so much energy, entertainment and discordant anger into it that even after listening to it approximately eight hundred million times (well, what else was I supposed to do when I was 13 and refusing to leave my bedroom because nobody understood me, other than listen to it on repeat?), I have still never tired of hearing those songs.

As a frontwoman, Poly Styrene packed a punch. When she died last April I cried like a baby for about ten hours, got very drunk and wrote this tribute to her. As mentioned in the post, the first song I ever heard of theirs, and for this reason still my favourite, was The Day The World Turned Day-glo, a post-apocalyptic tour de force with saxophones (I am yet to be dissuaded from my theory that there is nothing in the world that cannot be improved by the addition of brass instruments):

The first time I encountered the ‘befuck’ phenomenon (being unsure whether you want to be or fuck someone, but being slightly obsessed with them nonetheless, as articulated by @SonniesEdge) was when I started listening to Parallel Lines by Blondie. Although losing their edge in the early eighties with forays into disco and some quite frankly cringeworthy rap, this album had me hooked, and got me into their less popular eponymous first album, which featured a great song called Platinum Blonde as a bonus track on the 2001 re-release. (It was around this time, after an ill-fated experiment with bleach, that I realised that some people will just never suit blonde hair, and I am one of those people).

Another band to influence me when I was growing up were The Slits. They had pretty much everything I wanted in a band (they were an all female punk band; I had low expectations), and they were awesome. With a raw, dirty sound and a collective attitude problem, The Slits were admirable not just for their music, but because when they started they faced massive opposition because they wanted to make the music, not be the groupies. Viv Albertine did an episode of Robert Llewellyn’s Carpool last year where she talks at length about the history of the band and what they went through, which is well worth the twenty minute watch. My favourite song of theirs is Typical Girls, which is unfortunately all still true:

Through The Slits, I found myself listening to Bikini Kill and L7. As a very angry teenaged budding feminist and active misanthrope, they went down extremely well, and opened me up to a whole new world of riot grrl. Even nearly ten years after first hearing them, it’s a toss-up as to which one of these two songs will be the theme tune when a film is inevitably made of my life:

It’s kind of sad to notice that I wasn’t actually around when any of the aforementioned bands were in their heyday. There certainly appeared to be a dearth of female bands during my childhood, except for one – The Distillers. This band were probably the only female (or female-fronted, depending on the incarnation) band to get given airtime or column space by the media I consumed as a teenager. And oh god, Brody Dalle was cool. I have never wanted to befuck someone so much. My bedroom was so covered in pictures of her that I actually had to ‘in’ myself to my mum several times when she sat me down and told me that she really wouldn’t care at all if I were a lesbian. They gave me hope and showed me that there was still a place for women in punk. The first time I heard them was when I was transfixed by the video for City of Angels, and it still gives me the shivers a bit:

So there you have it, a short guide to music that remains a constant influence on me. I’d be really interested in hearing what stuff has influenced other people in the comments. At some point in the month I’ll hopefully also be posting about female punk bands that are currently active and touring, and other must-hear bands.

Image by anuko, shared under a Creative Commons Licence.