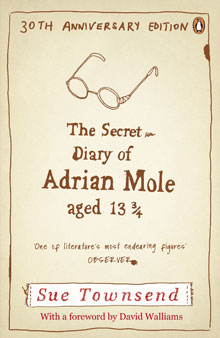 I’ve recently been doing some blogging for Hazel Davis‘s How To Be A Daughter project on the topic of mothers in fiction (with a bit of a feminist slant, of course).

As it’s the 30th anniversary of the publication of The Secret Diary of Adrian Mole aged 13 3/4, I’m cross-posting my piece about his mother, Pauline. (For more pieces about fictional mothers, keep an eye on How To Be A Daughter!) Hope you enjoy.

Read Adrian Mole’s earliest diaries as a teenager, and you’ll inevitably sympathise with our titular hero. Male or female, you cannot fail to identify with his woes about the state of his skin, school and sex, and his rage and frustration at the ineptitude and selfishness of his parents. His father George’s affair with Stick Insect Doreen Slater results in the birth of baby Brett; his mother Pauline’s affair with next-door neighbour Ratfink Lucas leads to confusion over the paternity of little Rosie.

It’s Pauline who bears the brunt of Adrian’s anger, though; she’s the one who he deems too old to have a baby, she’s the one who abandons him as she dashes off to her Sheffield lovenest, she’s the one he compares unfavourably to all the other mothers he knows. She doesn’t put the needs of her menfolk above her own; she doesn’t imitate the maternity-wear stylings of Princess Diana. For Adrian, she’s a failure as a mother.

Come back to the book as an adult, though, and your view will have changed markedly. Pauline’s undergoing a feminist awakening at a charged political time: a woman is prime minister but is destroying the working-classes, and the only challenger to her role as most prominent British female is a smiling, silenced princess, chosen to step into the spotlight because of her virginity and then her marriage to a royal man. After spending a miserable childhood in the potato fields of Norfolk with her fundamentalist Christian parents, and then her adult life running around after her husband and son, it’s no wonder that Pauline takes so readily to a new world of Germaine Greer, Greenham Common and assertiveness training.

But this is still early on in the progression of the popular feminist movement in the UK. Pauline starts to realise that she could have more than just her role as wife and mother: she proudly and excitedly (and inappropriately) declares to her son that her lover Lucas “fulfils my sexual needs. No more, no less”. Yet she realises soon enough that being treated like a ‘sex object’ by her boyfriend is no more satisfying that being treated as a skivvy by her husband and son; and more than that, this episode results in another pregnancy – and the only benefits she can identify to having another child are the increased family allowance and the possibility that she’ll have a little girl this time round. After all, what is attractive about motherhood when all it can offer to her is a variety of medical issues and further isolation from the outside world?

There are signs, though, that Pauline’s mindset has changed and she has no intention of ever again adopting her traditional homemaker role, no matter how much her husband and son may wish it. She informs them that if she wishes to go walking in the Hindu Kush, she will strap her imminent baby on her back and go; and once Rosie is born, we see George ironing baby clothes and being a hands-on dad. (We also see him threatening Adrian, “If you laugh, I’ll kill you” – George may well have adopted an ostensibly New Man approach within the home, but it seems that it’s just because he’s scared Pauline will leave him again if he doesn’t, rather than any change in his belief system. Still, it’s a start.)

Adrian is, of course, rather a staid teenager, and his ideas about appropriate gender behaviour seem largely to be modelled on his dad’s: he’s not that keen on women’s independence because of the impact it will have on his own life. For example, he tells his beloved girlfriend Pandora – brainy and beautiful – that he wants to marry her when they’re 16, after which he wouldn’t mind her having a job in a little cake shop because she will otherwise be occupied with looking after their children and baking bread in their kitchen, which is met with scorn. Still, the men in Adrian’s world all learn to keep their mouths shut, at least: George whispers that women should be at home cooking so he won’t be ‘karate-chopped to death’; the postman declares that runaway wives should be given a ‘thrashing’ and Adrian points out that if anyone tried to lay a finger on his mother, she would ‘beat them to pulp’.

This is significant because Pauline is by no means a physically imposing presence. We learn that she is quite a small person – ‘much smaller since you stopped wearing high heels,’ says her husband – and this idea that she would be able to defend herself in a fight is surely based on the fact that she is now prepared to defend herself verbally. She has developed a strong sense of self and she is not prepared to concede that to anyone, particularly not the men who claim to love her but really just want to control her.

Pandora may happily express her wish to have six children and be editor of The Times – such an idea had never previously occurred to Pauline or the women of her generation, and through Adrian’s diaries we see a microcosm of cataclysmic social change.