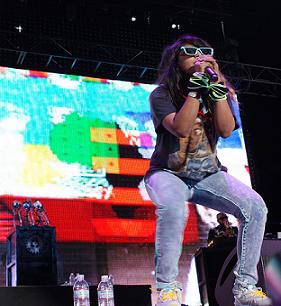 Music paste up: The return of M.I.A, more Wild Flag, and Boy Friend

Last week it was announced that M.I.A would be debuting her new single, ‘Bad Girls’ on Monday January 30th on Pitchfork, a day ahead of the singles release. The song is a taster for her fourth album, which is due for release in the summer on Mercury Records.

For the uninitiated, here she is with her best known track, the searing ‘Paper Planes’

Meanwhile Wild Flag are currently touring the UK on their first headline tour and you can hear a track from their critically acclaimed album below. It will be interesting to watch the band grow throughout 2012.

For a nice bit of tongue in cheek satire on the ‘girl in all male band’ phenomenon, please click here:

And lastly, readers may recall that I included the track ‘Egyptian Wrinkle’ by the band Boy Friend in the December playlist. The band’s debut album, also called Egyptian Wrinkle was released on 7th February and I shall be reviewing it imminently… watch this space. In the meantime, here is a video of the band performing the rather lovely ‘Lovedropper’ in a session from last year. Enjoy….

Image of M.I.A by Rasmin, from 2009, via flickr under a creative commons licence