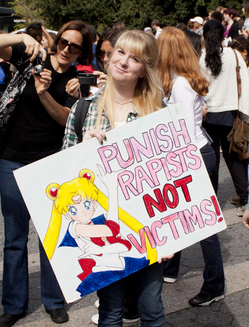 Women in Scotland are likely to be pressurised into releasing their medical records for use in court. The advice from the Crown is for prosecutors, and is supposed to be an attempt to increase conviction rates for rape, which currently stands at 7%.

The reasoning appears to be based on defence lawyers’ usage of previous mental health problems in the victim as a way to discredit them, so if the prosecutors can bring up medical records first, it will give them an advantage to present them in a positive way.

However, it is misguided. Firstly, there is the issue of privacy.

Sandy Brindley, from Rape Crisis Scotland, explains in the Scotsman that this change will deter women from coming forward.

“People contact us and ask what rights they have [to refuse to disclose medical records]. But if they say No, that might mean there’s no prosecution.

“Everyone knows you get a horrible time as a complainer in a rape trial and I’ve been very surprised by the lack of concern over this. Do we have to give up all our privacy rights to complain about assault?”

As well as the privacy concerns is the issue that using victims’ medical records in court is a way to effectively discredit the experiences of any woman who has a history of mental illness, or who has a learning disability.

These groups of women are particularly vulnerable to sexual assault, moreso than the general population, and this is, arguably, partially due to the fact that they are frequently disbelieved, are considered “unreliable witnesses” in the courts’ eyes, and are not taken seriously. Encouraging the use of medical records in court cases further promotes the misapprehension that there are groups of people, chosen by dint of their health conditions, who are more, or less, believable than others.

Nor does it take into account that developing mental health problems, or any kind of emotional distress, after being raped, is a normal, understandable and expected reaction. Using this to discredit and undermine the victim in court is a foul, and all too common tactic.

Medical notes are a personal record of an individual’s health. If refusing to surrender them to the mercy of barristers means your case will not go to court, there are serious flaws in the legal system.

[The image is a photograph of a woman taken at Slutwalk NYC. She has long blonde hair and there is a crowd behind her. She carries a home made placard which has a cartoon girl on it, and which reads “Punish rapists not victims!”. It was taken by Dave Bledsoe and is used under a Creative Commons Licence]