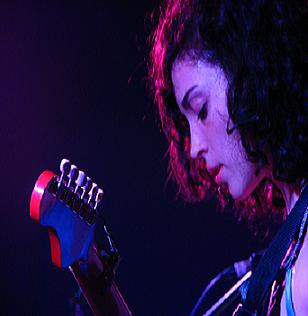 Annie Clark began her career with the Polyphonic Spree, has released two albums of dark but sweet left-of-centre pop, and has been touring her new album Strange Mercy across sold out venues around Europe. Louise Allan reveals that Clark hasn’t lost her taste for the disturbing and the angelic. Click here to read her review and to comment

Friends who missed Clark’s recent UK tour talk wistfully of wishing they’d got organised earlier as they watched previously easy to access venues sell out. The good news on that front is that St Vincent will be returning to the UK (well, London anyway) on the 27 Feb to play the Shepherds Bush Empire so if you did manage to get a ticket this time, enjoy. If you want to read a review of November’s date at the Queen Elizabeth Hall, please click here.

Clark is an intriguing, not to mention accomplished, artist because her music is so layered and complex but at the same time listenable as well as irresistible. Critics and listeners appeared to agree in 2011, with Strange Mercy appearing in both the Guardian’s readers and writers charts of the year.

Whilst the single ‘Cruel’ really captured the imagination this year, I thought I’d end this post with the first St Vincent song I heard. From Actor from 2009, this is the restless ‘Save me from what I want’.