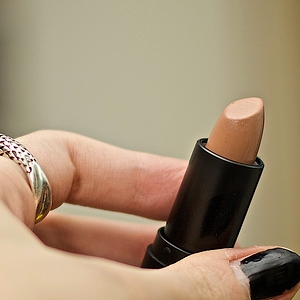 What colour is nude?

Elin Weiss has a master’s degree in women’s studies. Hennie Weiss is currently working on her master’s degree in sociology. Their interests include the sexualisation and representation of women in media, gender studies, feminism and equality

In 1988, Peggy McIntosh wrote the essay ‘White Privilege and Male Privilege: Unpacking the Invisible Knapsack’, which details some of the privileges that she had accrued from being white.

Even though McIntosh focused on many different areas of social life, we are concerned with the use of the word nude in fashion.

In many fashion magazines, a pale and slightly beige or pinkish colour is referred to as ‘nude’. But to whom is this colour actually nude?

It might seem innocent to refer to the specific beige-like or pinkish colour as nude, but it does mask an unchallenged and assumed belief that whiteness is considered to be the norm.

In a world where there is so much racial diversity, it is strange that white skin colour is presumed so normative that the word ‘nude’ can be applied to beige-pink colours so casually. This is othering to all women for whom this colour is not nude, and are excluded from membership in the ‘nude’ category. My nude is not necessarily your nude, and the other way around.

The overall notion that whiteness is the norm is also reflected in fashion in that many black women at times have problems finding makeup that properly reflects and blends with the colour of their skin. When walking in to a shop, there is usually a very small selection of hair care and makeup for women who are not white. Visiting the makeup or hair sections in department stores, we find that the great majority of products reflect this normative whiteness, and everyone else must go to a separate shelf or section for ‘other’ hair and make up products, or a specialist shop.

Even though McIntosh wrote more than 20 years ago, we believe that many of these statements are still very true today.

Many white women do not realise the privileges they attain based solely on their skin colour. We do not wish to attack or blame women for any of these privileges, but rather pay attention to the fact that whiteness is still the norm in many areas of life.

Just as heterosexuality is the overall norm (called heteronormativity) so is whiteness considered normative. As women and feminists, we believe that it is important to challenge the notion of whiteness as normative and to celebrate the beauty of diversity. As stated, referring to any particular colour as nude ignores the diversity of women in the UK and all over the world. Nude does not represent the skin colour of all women, and it does not even represent the diversity of whiteness that exists.

Photo by Maria Morri, shared on Flickr under a Creative Commons license