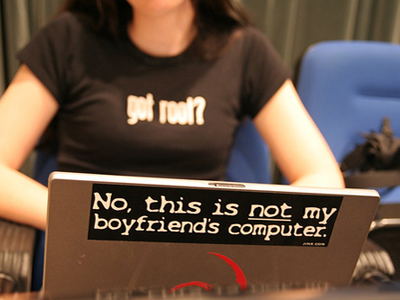 This is a guest post by Elin and Hennie Weiss

A recent article in Swedish Metro caught our attention for all the wrong reasons when it insinuated an assumed male norm of technical knowledge and intelligence. The article discussed the gendered differences in phone choice, one that concerned the gendered divide in use of the Android and Iphone.

The article, in its discussion regarding the gendered differences in phone preference, (which are not even that great when considering the statistics) assumed that the Android was the better choice of phone. The only explanations given to account for the assumed superiority of the Android was that Apple did not “deliver” when launching their latest mobile phone. The recent passing of technology mogul Steve Jobs was also attributed to the Android surpassing the Iphone in popularity. The article also stated that men, assumed to be more technology interested and technology driven, change their consumer behaviours before women do due to what appeared to be their presumed technologically intellectual head start. The underlying message was that women are not technologically intelligent, that they focus more on status objects than they do quality, and that the interests and knowledge of men is superior to that of women.

We are happy to declare that the article did mention that as soon as women realize their overconfidence in the Iphone and the “Iphone culture” they will catch on (to what the men already know) and change their mobile phone preference from the Iphone to the Android.

What the article mentioned, but did not attempt to explain however, was the fact that Iphone users use their phone more than the Android owners do. Perhaps it is the women who are pickier and more knowledgeable when it concerns their choice of phones, choosing the phone which better answers their needs and preferences. Why does it have to be the wrong choice to own an Iphone because it now apparently is a gendered question? How come this article made the news to begin with?

Instead, consider this, perhaps women’s greater use of the Iphone demonstrate women’s confidence and liking of the Apple products or the late Steve Jobs. Perhaps women spend more money on expensive technology such as the Iphone in order to make it last or to invest in good technology. Whatever the choice, why is one better than the other and why is it automatically women’s choices that are described as less knowledgeable or less modern and forward?

A second article, published in a different newspaper, stated however that the Android phone is more disruptive in terms of the signals needed to support the phone and its different apps, making the shared lines slower and less sufficient. Whatever phone is actually better does not really matter. What matters is that a large newspaper is concerned with promoting stereotypes of men as technologically smart and “right” and women as shallow and not as knowledgeable, without any real supporting facts.

Thereby, the focus of this piece does not lie in the fact that women and men prefer different types of mobile phones. Instead, we want to convey the notion that men are often described and assumed as the knowledgeable norm while women are the ones that differ. Whether it concerns phones, to driving a car, to mowing the lawn, women’s knowledge is assumed inferior when compared to men’s in terms of different gadgets.

Image ‘No, this is not‘ from Lady Pain (Marta Manso)’s Flickr photostream; used under Creative Commons license