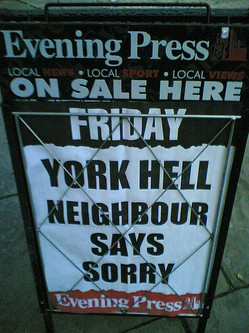 Are you a neighbour from hell? You might be surprised.

Most of us have had a neighbour from hell at some point in our lives. It tends to involve loud music late at night, harassment, dogs barking non-stop or turning a shared garden into a junkyard. We certainly know one when we see (or hear) one, and house moves can be filled with anxiety about what the new neighbours will be like.

In December, David Cameron made a speech about troubled families. He said,

Some in the press might call them ‘neighbours from hell’.

Whatever you call them, we’ve known for years that a relatively small number of families are the source of a large proportion of the problems in society.

“We’ve known for years” is quite a poor replacement for evidence (a bit like “it’s common sense”), and personally I doubt that a small number of problems are responsible for the kinds of problems in society that I see. We need to look higher up than that.

Cameron goes on to describe how expensive these ‘problem families’ are to society, with examples like a family visiting A&E “for things like self-harm”.

Jonathan Portes did some digging, to work out exactly where the PM’s figures had come from. Just who are these ‘problem families’ and ‘neighbours from hell’, who are so expensive, and “are responsible for the […] problems in society”?

It turns out that they are from the Department for Communities and Local Government. Jonathan found their definition was:

a family which satisfies at least 5 of the following 7 criteria:

a) no parent in work

c) no parent with qualifications,

e) one parent with longstanding disability/illness

So a woman with an anxiety disorder, who is a parent, who has no qualifications, and is therefore out of work and has a low income, so can not afford all the clothes and food they might need, is a “neighbour from hell”. A disabled man for whom the extra costs of disability mean that the family also struggles for money, he can’t work because workplaces are inaccessible, and he went to a “special school” which didn’t offer its pupils the chance to do GCSEs, and who is in poor quality housing because it was the only accessible property they could find? Also a “neighbour from hell”? Responsible for problems in society?

In other words, the “troubled families” in the Prime Minister’s speech are not necessarily “neighbours from hell” at all. They are poor.

I’ve had neighbours from hell. They are not these people.

(Extra irony points for this gem,

Take the work of Emma Harrison, who has given us all inspiration in the last 12 months.

She has shown that high aspirations for families is important – and that we shouldn’t write them off as unreachable or un-teachable.

She has real ambition for these families and I know we can count on her to help drive this campaign forward in the future with us.

Yes, the same Emma Harrison who has resigned after allegations of fraudulent use of Government money. Family champion, or neighbour from hell, Cameron?)

[The image is a photograph of an Evening Press newspaper headline in a stand, reading “York hell neighbour says sorry”. It was taken by hugovk and is used under a Creative Commons Licence]