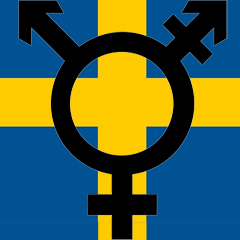 I wrote last month about the decision by the conservative Christian Democrat party government (along with the nationalist Sweden Democrat party) to retain a 1972 gender recognition law under which TS/TG and gender variant people who want to change their legal gender are required to be sterilised. The requirement was a violation of the European Convention on Human Rights, which is enacted as law in Sweden.

There was an international outcry at the loss of the opportunity to bring the legislation up to date: in Sweden, the law is only reviewed every forty years. Advocacy groups and activists from around the world protested the decision and an online petition to the Swedish Prime Minister received over 77,000 signatures.

Now, via Ulrika Westerlund, President of RFSL (the Swedish Federation for Lesbian, Gay, Bisexual and Transgender Rights), I learn that the campaign appears to have been successful, with the conservative party which was blocking the reform to remove the criteria apparently having changed its mind.

According to a statement in Debatt:

This is very good news indeed for TS/TG and gender variant people in Sweden who wish to change their legal gender, although the underlying issue (the linking of people’s legal identity to their medical status) remains unexamined.

As a footnote, it should also be remembered that Sweden isn’t the only member state of the European Union requiring TS/TG and gender variant people to undergo surgery before they can change their legal identity. Published work by the TGEU’s TVT Project suggests at least eight other countries – Denmark, France, Ireland, Italy, Netherlands, Poland, Slovakia, Spain – where legal change of gender is contingent upon GRS/sterilisation or Gender Reassignment Therapy and we can only hope that these countries will follow Sweden’s example. (Note: the TVT Project’s list is not definitive and is subject to ongoing research and updates).