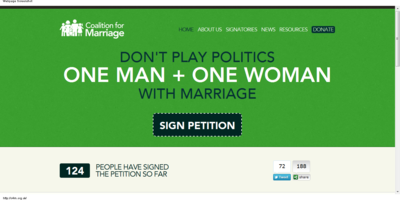 A terrified umbrella group has been set up who believe that because of the gays, that teetering, vulnerable institution which is heterosexual marriage, is under threat.

Warning of the Profound Consequences of legalising same sex marriage, the Coalition for Marriage fear that, “if marriage is redefined, those who believe in traditional marriage will be sidelined”. They also, somewhat inexplicably, warn that “People’s careers could be harmed, couples seeking to adopt or foster could be excluded”. Because presumably, if the gays can marry, this will cause widespread redundancies and it will mean that social services will no longer accept heterosexual married couples as potential adopters or foster carers. 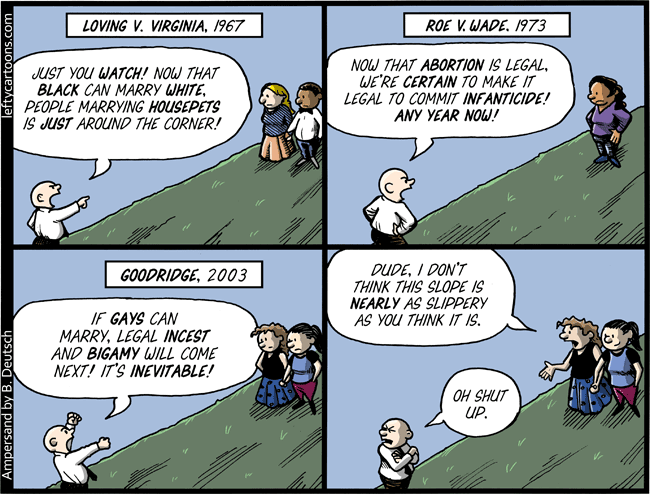 Following is that infamous slippery slope, “If marriage is redefined once, what is to stop it being redefined to allow polygamy?”. I’m surprised they didn’t carry on to the usual “or what is to stop people marrying their pets?”. Are the Coalition for Marriage so fearful that if same sex relationships get equal rights, heterosexual people will abandon traditional marriage in droves, to marry their gay best friend instead?

The Coalition for Marriage are running a petition which, they say, “demonstrates that there is broad public opposition to redefining marriage”. They may have jumped the gun with this statement, as the ‘broad public support’ currently stands at 124 signatories, the vast majority of whom are Bishops, Rectors, members of the General Synod of the Church of England, vicars, Ministers and Pastors. Three Labour MPs and four Conservative MPs have also signed, but the people who have signed can be considered to be neither numerous nor broad in range at this stage.

They begrudgingly promote Civil Partnerships as justification for not allowing same sex marriage, before pointing out that “It’s not discriminatory to support traditional marriage”, going on to say, “People should not feel pressurised to go along with same-sex marriage just because of political correctness. They should be free to express their views”. So, I’m expressing my views.

Quite why allowing same sex people to marry fills these people with such dread is not something I can understand. If I marry a girlfriend, it doesn’t have to be karmically balanced out by a straight couple getting divorced. Heterosexual marriage is one of the most established institutions in the whole world – just what do they imagine might happen if I could join in? It’s almost flattering that they think equal marriage rights would be such a powerful move that the entire heteropatriarchal institution would be under immediate threat. I would be quite happy if it would, but I fear it is overestimating what two men or two women getting married would actually mean.

(Clue, it would mean they were married, then got on with their lives like everyone else)

The Coalition are asking for people to sign up to the following statement,

I support the legal definition of marriage which is the voluntary union for life of one man and one woman to the exclusion of all others. I oppose any attempt to redefine it.

Mind you, having just watched this video, maybe the Coalition for Marriage is right: gay marriage could in fact end humanity.

In all seriousness, however, many people struggle greatly with the inability to commit to marriage within their relationships. A video of Kitty Lambert in New York expresses powerfully just how ridiculous the current laws are.

You can see the full-length version of that video here.

[The first image is a screenshot of the Coalition for Marriage website. The second is a cartoon from Lefty Cartoons, used under a Creative Commons Licence. Hat tip to @bhiggi for helping me to find the second video]