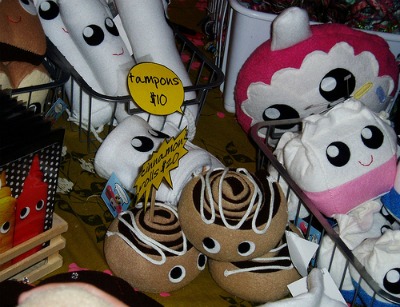 In praise of tampons

I’m just going to put this out there: I reckon tampons are almost as essential to female freedom and equality as birth control. It’s not something that we like to talk about very much. In fact, just typing the word now makes my inner-13 year old squirm. But quietly, for at least a few days every month, don’t we all THANK GOD that we have access to these blush-making tubes of sanitation?

They’re extraordinary things, really. Tampons – unlike their sisters, Sanitary Towels – enable us to maintain an almost unbroken stride throughout the month. There’s none of the mess and smell of pads; tampons go in, they get replaced, bada-bing bada-boom. Period done. You can still go running, or swimming, or wear a thong if you want to. Basically, you can do everything men can do all the time without having to worry about blood getting everywhere.

Gone are the days of society gentlewomen having to retreat to bed with piles of rags. Or worse, much worse: of poor women having to wash bloodied scraps, trying to stem the flow while the babies cry and the adolescent daughter shudders at the machinations of her own body. No, wait, those days are still very much around. It’s easy to imagine that just because developed countries have learnt to cope with periods, everyone else has too. But in slums across the world, women are going without sanitation of even the most basic kind.

The F Word blog on “Menstruation”

Picture by the_toe_stubber, used under a Creative Commons License