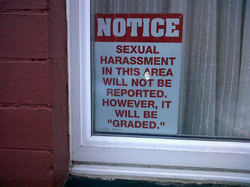 Is it any surprise?

On a day when it turns out that Boris Johnson, having been persuaded to give money to charity, announces, “It’s outrageous! I’ve been raped! I’ve been raped!“, and someone spots this sign in a front window in Leeds, it becomes clear how two men who filmed themselves raping an 11 year old girl get only 40 months in jail, with the Judge saying, “Despite her age it is accepted that she was a willing participant”*, while reporters in two papers describe the men has having ‘had sex with’ her, rather than ‘raped’ her.

When the word rape is downplayed by people like Boris, and when getting away with sexual assault is something that is advertised in the window of someone’s home, then it almost doesn’t matter that the Judge went on to state, “but the law is there to protect young girls from this type of behaviour and to protect them from themselves. The girl had clearly been subjected to systematic sexual exploitation and you willingly used her for your own sexual gratification”.

*I can only find reporting of this story so far in The Sun and The Daily Mail. While I don’t relish providing traffic to either site, if you want to see them, they are here and here.

[The image is a photograph of an offensive sign reading “Notice: Sexual harassment in this area will not be reported. However, it will be “graded””. It was taken by Dominic Okey and is used with permission]