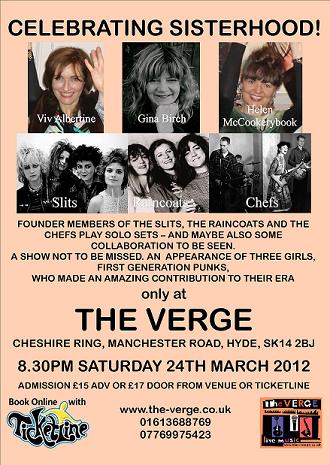 Music paste up: Punk women in Manchester, Riot Grrrl in Russia, and Bradford 1 in 12 club under threat

Those of you who read and enjoyed the Punk Women series may have been wondering about what some or all of the women I interviewed for it have been up to lately, well… two of them (Helen McCookerybook and Gina Birch) will be appearing with Viv Albertine at The Verge in Hyde (yes, I know it’s Tameside not Manchester, but…) on Saturday 24 March.

Records and Tea: the best of The Chefs (Helen’s second band) will be out on April 23 on Damaged Goods.

To find out more about what Helen will be up to in the near future, please check out her very entertaining blog.

(By the way, I’ve included the second of these clips because I found it funny… I never got on with stillettos either, but in recent years have had shoe trauma of a different kind. My friend Sara and I, limping down Oxford Road in Manchester one evening, ruefully remarked to each other that while our respective mothers had warned us about the evils of stilettos, nothing at all had been said of the perils of ballet pumps, and flat feet and ingrown toenails were now our just desserts…)

In sadder news, the legendary 1in12 Club social centre based in Bradford is going through a tough patch, according to SCHNews. Having raised enough money for a necessary refurb after a failed fire inspection, the club has fallen prey to extensive and expensive vandalism. “Rough estimates put the damage at around £2000” apparently.

The 1in12 began life in 1981 as an offshoot of the local Claimants Union, and in 1992/3 it served as a key venue for the the Leeds and Bradford Riot Grrrl chapter, who held gigs and meetings there.

A fresh fundraising drive is underway to raise money to save the club from closure, and The Cowley Club in Brighton are amongst on of a number of people pledging support. They are organising a host of fundraising events for the 1in12 Club, including a gig on Wednesday 22nd 7pm, with Black Light Orchestra & more TBC. There’s also a gig on Friday 24th 7pm with Boredom, Pettybone and State Icons, and on Sunday 26th 2-6pm a Vegan Sunday Roast. Please click here for more info on the Cowley Club events.

In a tenuous, and rather more uplifting link, riot grrrl has been making its presence felt in Russia, according to The Guardian, and F-Word contributer Catherine Elms has been blogging over on Girls Are about her experiences as a girl with a guitar tentatively trying to get a band together.

And She Makes War (who I wrongly assumed were a band, not an individual) has some London and Leeds dates coming up soon:

February 14 – Brixton Windmill (with Hysterical Injury and Lilies On Mars)

To finish, this is the recent (ish) single by Zola Jesus, another one woman band effectively, whose album we reviewed last year. This is the excellent ‘In Your Nature’.