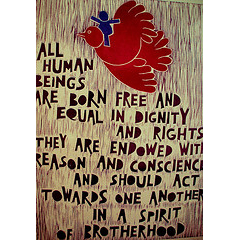 Since when are associations to slavery sexy and fun?

Danish underwear company tbs were advertising in this year’s nu buyer’s magazine for Copenhagen Fashion Week, which was held between the 2nd and 4th of February 2012 in Copenhagen, Denmark. One of their advertisements caught our attention with its tasteless and horrific associations to slavery. A full two page advertisement, with five black women treating cotton (in their underwear), is featured in the nu magazine. The slogan appears in the top left corner and states: It’s hard to improve perfect. On the bottom right it says: visit the girls at the factory.

There are so many ‘wrongs’ with this advertisement and the obvious associations to slavery cannot be misinterpreted. Slavery is not something to be commercialised or lightly addressed. There was nothing fun or sexy about robbing people their freedom, splitting up families, forcing people to work all hours of the day, while physically and mentally abusing them. Slavery was not fun or sexy and horrendous acts like that should not be joked about. We all know that underwear ads and campaigns are usually over the top and highly sexualised but this one wins the prize for being the most tasteless we have ever seen. How did this idea develop and how come it is ok to associate underwear with slavery and the picking and treating of cotton?

This is not, however, the only photo of its kind. The full tbs catalogue can be viewed here [direct link to PDF] where more, and similar, photographs are presented. The one described above is featured on page 8 in the catalogue. Another photo shows a black woman sitting down with her legs spread apart (again in underwear) as she is pulling cotton. The title reads: processing the cotton. In yet another photo another black woman is sitting down as she is washing cotton. Here the title states: washing and dyeing. The women appear sweaty as they are working hard to produce the products. There is also a photo in which the women appear to be having fun, laughing and messing around.

The tbs slogan: It’s hard to improve perfect is also incredibly inappropriate in light of what the photos are showing. It can be read to suggest that slavery and abuse of black people is perfectly normal and that things were good back in the day when black women worked in factories, plantations and fields gathering cotton for the best interest of white slave owners. It is also incredibly patronising to portray that type of factory environment and to associate it with fun and laughter instead of the suffering that took place in reality during the time of imperialism and slavery.

Secondly, the advertisement is also patronising and inappropriate when considering the fact that many large corporations (in the clothing industry and elsewhere) often outsource their labour to women and men (and sometimes children) in other countries paying them next to nothing as the workers spend many hours beyond an eight hour working day processing goods that are sold in western nations. The tbs advertisement also reflects an inaccurate picture of today’s working environments in many factories around the world where slave like conditions are still present. The associations to slavery in the tbs campaign extends beyond the concepts of greed and monetary gain and are also overtly dehumanizing and racist both in light of the history of slavery and the working conditions of many people around the world today.

This advertisement campaigns raises many questions: How far have we come in our fight against racism? Have advertisers and companies no moral compass that would lead them to believe that a campaign such as this is racist and completely demeaning considering the brutal history of slavery and struggles and hardships of so many black slaves? Has it become ok to commercialise and sexualise anything in order to gain attention, publicity and to make money? As mentioned above, this advertisement campaign is probably the worst we have ever seen, and we hope that others too will react, and that collectively, we can take action against future campaigns such as this one.

The image shows a stylised image of a person sitting on a dove above the text of the First Article of the Universal Declaration of Human Rights: “All human beings are born free and equal in dignity and rights.They are endowed with reason and conscience and should act towards one another in a spirit of brotherhood”.