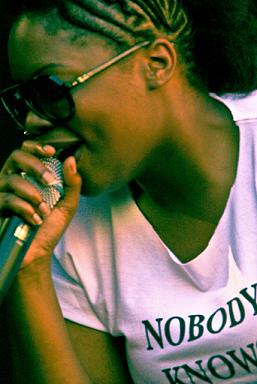 Back in the summer of 2009, there was much excitement when an unprecedented six women were nominated for the Mercury Music Prize. While much of the attention focused on previous nominee Bat For Lashes, and bookies choices and newcomers Florence + The Machine and La Roux, in the end the award was won by a young woman from South London whose album was so new it had barely been heard: Speech Debelle.

Enthusiastic reviews of Speech’s album, Speech Therapy emerged, suggesting that the prize had been well deserved, and a fresh new talent was hailed as living up to the hype.

Holly included one of the tracks from Speech Therapy in her recent hip hop playlist. and mentioned that a new album would be out soon.

That album, Freedom of speech is released on Ninja Tune on 13 February, and a video teaser has been available for a couple of months now. Although I’m a little dubious of the use of the word ‘lesbian’ (and it’s rhyme ‘thespian’) on this track, I can’t help liking the track. This is ‘Studio Backpack Rap’, which suggest Speech may have been getting cabin fever whilst recording…

We didn’t get any volunteers to review this album when we put callouts out, but if anyone is interested, please get in touch.

Picture of Speech Debelle on stage in 2010 by nudevinyl. Shared via a flickr creative commons licence