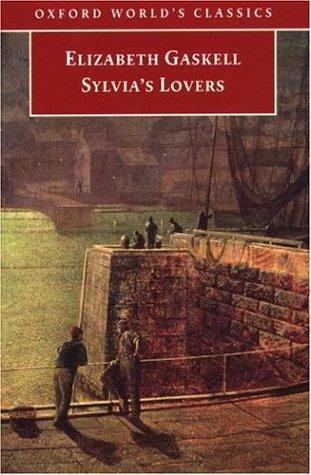 Elizabeth Gaskell’s Sylvia’s Lovers begins in a lively, upbeat tone; its first volume is undoubtedly delightful and might, in the first instance, lead a reader to assume that the novel is meant to be primarily a romantic story. However, as you read on through the “gathering shadows” of the second volume, and the unrestrained melodrama and improbable coincidences of the third, the novel concludes as something along the lines of a love story gone wrong.

It’s Monkshaven during the French Revolutionary Wars; press gangs are seizing the crews of returning whalers to force into the Navy. Sylvia’s imagination has been fired by Kinraid’s heroics in trying to protect his shipmates by having a shoot out with one of these gangs, during which he’s killed two of its members, only escaping trial through being “kicked aside and left for dead” himself.

During his recovery, Kinraid stays with his relatives, the Corneys, and takes to coming round to talk with Sylvia’s father, the foolish Daniel Robson, an ex-whaler himself. Kinraid impresses Sylvia with his tales of adventure on the Greenland Seas, and she is struck by his handsomeness: “His eyes and hair were dark, the former quick, deep set, and penetrating; the latter curly, and almost in ringlets. His teeth gleamed white as he smiled at her.”

Sylvia’s cousin, Philip Hepburn, who has “made an idol” of Sylvia, is bitterly jealous. He runs a haberdashery, and in opposition to the sociable athletic Kinraid, Philip is drooping, solemn and reserved, with an indoors complexion. His ridiculous manner of paying court to the unreflective girl is to act as her tutor.

Later at the Corney’s New Years party, Kinraid is so impressed with Sylvia’s “beauty and pretty modest ways” that he comes back to propose before sailing. He does this with typical dash: “Ever sin’ I saw you in the kitchen corner sitting crouching behind my Uncle, I as good as swore that I’d have you for my wife, or never wed at all.” (Note these words, in view of later events).

Sylvia finds some comfort in the birth of their baby Bella, but continues to mourn Kinraid almost obsessively in secret

On his way back to his ship, Kinraid is surprised by a press gang, the only witness being Hepburn. Kinraid begs Hepburn to give a message to Sylvia asking her to remain true to him, promising to return.

Hepburn is torn. He thinks this promise means nothing; he has heard from his business partner William Coulson about Kinraid’s jilting of Coulson’s sister and her successor. He is to hear casual talk from a group of sailors in a public house about Kinraid’s successes with women.

In volume two, Hepburn decides against passing Kinraid’s message to the mourning Sylvia, convinced that he will never return. Everyone assumes that Kinraid has drowned, and Hepburn persuades himself that he is justified in keeping the truth from Sylvia.

Events soon push Sylvia into accepting Hepburn’s proposal. Her father is tried and hanged for starting an anti-press gang riot and the shock drives her mother insane. Sylvia agrees to marry Hepburn to provide her with a comfortable home.

Sylvia is stunned into “a sort of temporary numbness”, finding life in the town house repressive. Hepburn, whose wish was to tame Sylvia, ironically longs for her old, wilful self. She finds some comfort in the birth of their baby Bella, but continues to mourn Kinraid almost obsessively in secret.

Then Kinraid comes back, now a war hero. By dint of diligence and bravery he’s risen through the ranks to Naval Lieutenant, a shining example of the ‘self help’ so beloved by Victorians. In a splendid piece of melodrama, the three confront each other. Kinraid urges Sylvia to run away with him, showing either a cynical streak or boundless faith in the power of his Admiral to obtain an annulment for her. She refuses, but takes an oath that she will “never forgive yon man” for keeping her and Kinraid apart.

Because Gaskell’s reticence on sexual matters precludes any mention of Sylvia’s physical response to Hepburn when they are married, the impression that many critics have – that Sylvia finds him physically repellent – may not have been her intention

Hepburn enlists as a marine, hoping to redeem himself in her eyes by becoming a hero himself. He saves the life of the injured Kinraid at the Siege of Acre but is unrecognisably disfigured in an explosion. He comes back to Monkshaven to watch over his family, living in poverty.

Meanwhile Sylvia is disillusioned with Kinraid when she hears that he has conveniently married an heiress only months after his passionate parting from her. Mrs Kinraid (a superficial girl, who speaks gushingly of ‘My Dear Captain’) calls on her to enquire after Hepburn, and tells her of his heroics. Hepburn carries out still more in rescuing baby Bella from the waves, and incurring mortal injuries himself. He and Sylvia are reconciled in mutual forgiveness on his deathbed, and she lingers in miserable repentance for some years.

Many critics object to the melodrama and coincidences of this last volume, which contrast with the apparent realism of the first two. Yet, coincidences aren’t absent from the earlier story – for instance, Hepburn just happens to be the only witness of Kinraid’s impressment.

Certainly, there is melodrama – Victorians were fond of that. Perhaps a greater fault is the rushed end to the story, so that Sylvia’s disillusionment with her old hero Kinraid and her forgiveness of Hepburn for his deceit are hurried through in a few chapters, whereas her developing passion for the superficial Kinraid and her mourning for him, receive a lengthy examination in the earlier volumes.

Because Gaskell’s reticence on sexual matters precludes any mention of Sylvia’s physical response to Hepburn when they are married, the impression that many critics have – that Sylvia finds him physically repellent – may not (in so far as she confronted the issue directly) have been her intention. Gaskell may have regarded sex with true Victorian ‘modesty’, as a duty rather than a pleasure for wives, even when they were in love. She may have meant Sylvia to be indifferent to rather than disgusted with Hepburn as a man. We can only guess. This makes it hard to assess what Sylvia is meant to feel for Hepburn at the end of the story. It’s unclear whether she loves him in any positive sense, or rather appreciates him as someone who loved her devotedly but with tragically mistaken overprotectiveness.

Ultimately, Gaskell stresses the tragic consequences of “making an idol” out of another human being. This is seen in the behaviour of several characters in the novel. Therefore, despite the pervasive themes of love and romance, I would argue that the novel is, in fact, an anti-romantic novel.

In line with this anti-romantic theme, Gaskell makes Hepburn her ‘hero’ despite his treachery. One of the problems is that she creates him as a polar opposite to the flashy, “fickle and false” Charley Kinraid, who seems to be a rather ironic comment on the hero caricature found in novels. Accordingly, both are to some extent stereotypes. It is a sign of Gaskell’s art that it is only in some places that this is obvious, i.e. in the confrontation scene in the third volume, when both speak like cardboard characters:

” ‘Oh, thou false heart!’ exclaimed Kinraid… ‘If ever I trusted woman, I trusted you, Sylvia Robson!… I can get your pretence of a marriage set aside… Leave that damned fellow to repent of a trick he played an honest sailor…’

Gaskell neglects making either man sympathetic and attractive; Kinraid and Hepburn are oddly interdependent, almost like two incomplete halves of one man, and both inadequate as heroes. Kinraid is a thoroughgoing opportunist, as shown by his later career. As a Navy Captain, he must necessarily collude with the press gangs whose activities he once opposed to the point of murder, for at that time a Navy Captain needed them to supply a large percentage of his crew. Hepburn, once so obsessed by social status, by contrast increases in spiritual stature as he undergoes a sort of pilgrimage of atonement and suffering.

A great part of Sylvia’s problem is that a dull, mundane fate of domesticity is imposed upon her, and she can no longer even live “an outdoor life” on a farm

Above anything, though, I was struck by the sheer unfairness of Sylvia’s fate. Gaskell is always harder on her female characters than her males, and only in the case of Ruth is this more obvious than in her taming of the wild Sylvia Robson into the housebroken repentant Sylvia Hepburn of the end.

As Patsy Stoneman comments in her book, Elizabeth Gaskell, if Sylvia hadn’t been precluded as a woman from going to sea and having adventures herself, she would never have become so obsessed by Kinraid and his aura of excitement and danger. Part of her longing for him is her wish to acquire adventure vicariously.

A great part of Sylvia’s problem is that a dull, mundane fate of domesticity is imposed upon her, and she can no longer even live “an outdoor life” on a farm. Eventually she is betrayed by both men in their individual ways and she knows it. In her outburst to Alice and Hester Rose (the one embittered and the other resigned to her own fate) after hearing of Kinraid’s marriage, Sylvia exclaims, “I’m speaking like a woman… as finds out as she’s been cheated by men as she trusted, and has no help for it… If it weren’t for baby there, I could think as it were my death as would be best. Those one thinks the most on, forgets one soonest.”

As a Christian, Gaskell considered that in swearing never to forgive her husband Sylvia had committed a serious sin. Sylvia thinks so too, and fears damnation. Gaskell believes in a God of mercy, but the earthly fate of Sylvia Robson is wretched. Hepburn is at least allowed to die speedily, whilst the unscrupulous Kinraid faces a glowing future.