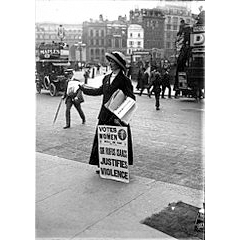 The Lost World of the Suffragettes

Last weekend, Radio 4 broadcast an absorbing documentary called The Lost World of the Suffragettes. The hour long programme highlighted a project undertaken by the historian Sir Brian Harrison between 1974 and 1981, in which he interviewed over 200 women to compile a set of audio files recording the experiences of some of those who had been part of the Suffragette and Suffragist Movements.

Those recordings – Oral Evidence on the Suffragette and Suffragist Movements: The Brian Harrison Interviews – are now in the care of the Women’s Library at London Metropolitan University and the makers of Saturday’s programme were given extensive access to the archive.

In the programme, the presenter Dan Snow listened to some of the tapes with Sir Brian Harrison, Baroness Brenda Dean, Shami Chakrabarti and suffragette historian Elizabeth Crawford. The subject matter was wide-ranging and covered many aspects of the movement, from the various direct actions and their consequences for the individual women involved, through to the ideological aspects of this important campaign to extend voting rights to women.

The interviews with women who were beaten by police and force-fed while on hunger strike were particularly harrowing to hear and, as Shami Chakrabarti pointed out, the actions of the state were nothing less than torture.

Click here to hear the programme Archive on 4: The Lost World of the Suffragettes on BBC iPlayer.