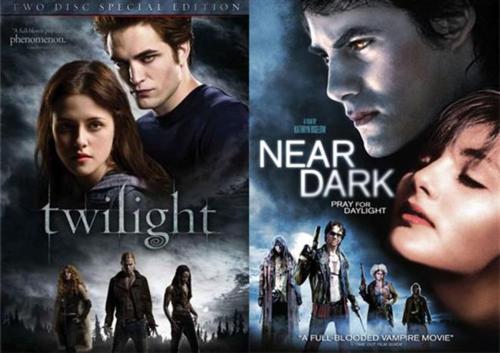 The Twilighting of Near Dark

If you are a vampire movie fan you’ve probably watched Near Dark. The film was Kathryn Bigelow’s first as a director.

Because the studio didn’t trust her, “the film’s producer, Edward S. Feldman told her that if she couldn’t handle or didn’t know what she was doing while filming after five days, she would be replaced. She kept the job.”

Anyway, the plot of the movie is this: a mid-western farm boy (Adrian Pasdar) tries to chat up a girl called Mae that he meets on the side of the road (Jenny Wright). But it turns out that Mae is a vampire! Who bites him and kidnaps him into her dysfunctional vampire family.

The whole point is that Mae is a vampire! But when the film was recently released on Bluray, I guess they thought that wouldn’t sell? Check out how similar the cover is to the Twilight art:

The reasons are commercial, sure: Twilight is super popular, so they want to cash in. But also it’s interesting from a gender perspective that they’ve decided on a cover which emphasises the theme of ‘dangerous, protective vampire dude that looms over girl’.

If anything, Near Dark tells a nearly opposite story to Twilight (which is all I can say about that without spoilers). There’s a certain amount of Mae being rescued, but also of her doing the rescuing as well.

Mae’s character is problematic, but interesting: a bit dependant at times, but that is largely because she’s been trapped into travelling the country murdering people for blood by Lance Hendriksen. And interestingly Pasdar’s character can’t quite see underneath her superficial appearance of innocence and delicacy, even once he’s seen her feed.

For contrast, here’s how the film was advertised when it was released at the cinema in 1987. The Italian poster is even better, arguably.