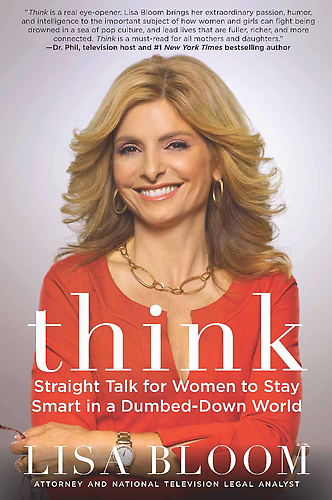 Think: Straight Talk for Women to Stay Smart in a Dumbed-Down World

Lisa Bloom’s Think: Straight Talk for Women to Stay Smart in a Dumbed-Down World calls for women to turn off the television, put down that glossy magazine and engage their brains in something other than the latest soap plotlines. We need to use our critical thinking skills or risk losing them for good and succumbing to a lifetime of vanity and trivia.

“To consider what we don’t know because we choose to look at fluff and nonsense, instead of what matters is heartbreaking”, Bloom writes. Bloom suggests that the things we should be thinking about include: female education, international affairs, what to do about sex trafficking and which good books to read. Things we should spend less time thinking about are: housework, celebrities, what to have for dinner tonight, our appearance and our love lives.

Her direct, confrontational style means that her admirable argument stays the right side of preachy

The book is loosely split into two: the first half is a whistle-stop tour of everything that is wrong in the world (the things we should be thinking about) and the second is advice on how to block our ears from the ‘fluff’ and take positive action. She writes briefly but emotively about genocide and sustainability: “if our planet becomes increasingly uninhabitable, we are, literally, cooked. So it’s my – our – responsibility to learn about this global threat and, at a minimum, speak out about it and vote for leaders who have the guts to take action on it.”

Her direct, confrontational style means that her admirable argument stays the right side of preachy. Her provocative and personal narrative pulls no punches as she writes (with tongue firmly in cheek) about the need to find a “balance between being a ‘lovable airhead’ and ‘flat-out dangerous, like three-year-olds with loaded machine guns'”, and claims that young women would, on the whole, prefer to be run over by a truck than get fat.

Bloom is a lawyer, television commentator and single mother, and her multiple roles are evident in her self-assured, media savvy, occasional world-weary tone. Accordingly her book is part social critique, part feminist text, part annotated bibliography, part self-help, part memoir, part comedy and, somewhat oddly, even a recipe book in part. Chapters have titles such as ‘What a Waste It’s Been to Lose Our Minds’ and ‘Reclaiming the Brains God Gave Ya’, as well as ‘solutions’ sections like ‘Recommended Reading’ and ‘Un-Recipes’ (quick meal ideas for when you have better things to do than cook – which in Bloom’s eyes is always).

‘If we buy tabloids and watch celebrity gossip shows to the exclusion of serious news outlets that struggle to cover international stories, we too are to blame’

What really riles Bloom (and she does get riled, and often) is not only that we are living in a culture where beauty is valued over brains, but that millions of women are unthinkingly complicit. Celebrity culture comes in for harsh criticism: “if we buy tabloids and watch celebrity gossip shows to the exclusion of serious news outlets that struggle to cover international stories, we too are to blame”.

Here, Bloom is in a difficult situation – she is after all a small screen celebrity, groomed to within an inch of her life, white teeth on show, smiling from her book jacket. She could be on the cover of a glossy magazine herself. She is quick to point out that this image is not the ‘real’ her, so why present that image? The dichotomy between brainy, switched on women and celebrity-obsessed, uber-groomed women isn’t directly addressed. 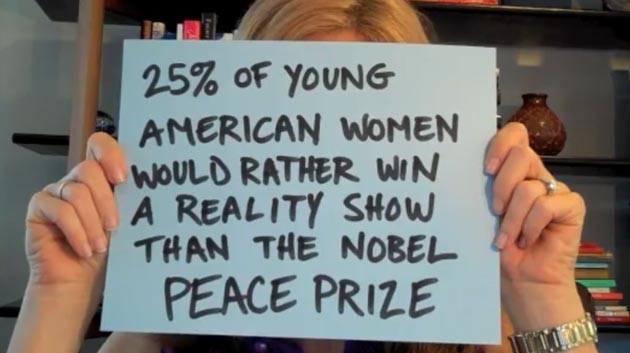 In deriding women who choose to ‘waste’ their brain cells worrying about what to wear, Bloom taps into a dubious willingness of some women to define themselves against other women’s perceived shortcomings. It’s an uncomfortable, and gendered, issue hidden in the book that could really be explored further.

It’s hardly a revelation that we would probably be better, more rounded, people if we read less Hello! magazine and thought more about how to combat climate change and studied up on world affairs; yet Bloom’s argument is fresh, funny and demands attention. Think is thus both very engaging and strangely flimsy. The earlier chapters are impassioned and humorous but they trail off into lists and anecdotes. ‘Un-Recipes’ makes a rather bathetic end to an impassioned personal manifesto. As a whole Think reads more like a series of columns than a coherent book – but you can whip through it in a couple of sittings, laughing (as well as thinking) along the way.

While some of Think is obvious, elsewhere in the book there are more complex issues to consider, like: how should we react to environmental and humanitarian crisis? What is the human price of turning the other cheek to genocide? What will become of a society that “has laser-like focus on the sex lives of celebrities but only the dimmest understanding of the people beyond our borders”? These sections are a sobering call to action.

Occasionally, however, Bloom’s tone is irksome. Her shout out to “listen to my girl Virginia Woolf” made me squirm. Notwithstanding A Room of One’s Own, I somehow doubt Bloom and Woolf would have been best buddies. Also, she is sometimes just a little too pleased with her own situation. You can’t help but detect a self-congratulatory air when Bloom highlights the many achievements of her well-rounded children. And she is undoubtedly speaking from a position of privilege, which can make some of her rants against ‘dumb’ tabloid media and female aspirations a little class biased. She demands we cut down on housework – quite difficult to do if you don’t have the fat salary to pay for all those cleaners. 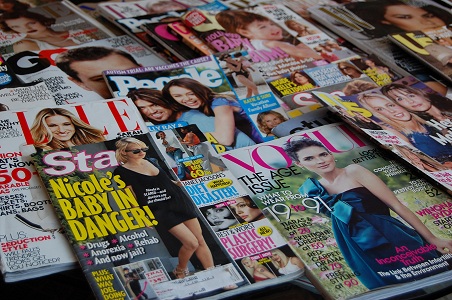 Ultimately, Bloom is asking for us to be agents in our own culture, to be proactive and critical members of society rather than passive observers. The worse thing about our celebrity obsessed society is that it narrows our perspective. We shouldn’t feel sorry for the celebrities whose private lives are splashed across the tabloids; it’s us as consumers who are to be pitied.

“When it comes to thinking”, Bloom says, “we’ve taken a very wrong turn down a very dark alley”, and she is infectiously passionate about the need for us to reconnect with the things that really matter. Her cut-to-the-chase attitude and frank advice is, on the whole, uplifting and based on common sense – if you really think about it.

Leonie is a reader, writer, web editor with printmaking tendencies. She has a background in book publishing and education marketing and can usually be found in one of Hackney’s many charity shops