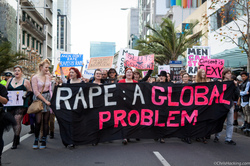 Unilad: an entire culture summed up in one hideous website

This week I happened upon a website, Unilad, in which one writer ended a horrendously offensive with the now infamous line:

“And if the girl you’ve taken for a drink…won’t ‘spread for your head’, think about this mathematical statistic: 85% of rape cases go unreported.

That seems to be fairly good odds.”

Apparently this is supposed to be some sort of a joke, devoid as it is from any wit – although I can’t imagine a circumstance under which you could describe the statement as funny.

Soon after reading the article, I informed them that it may break hate speech laws. They responded, not-at-all predictably, by asking me, “are you a dyke?”

Almost immediately the twittersphere was engulfed in outrage. Thousands were calling on the website to apologise and remove the offending content. It turned out UniLad’s offensive content was actually the entirety of the website. Articles advising readers on How To Fuck Your Lecturer, informing you on The Problem With Slags and a particularly cheery anecdote called The Angry Shag which depicted smashing a woman’s face into the wall during intercourse in order “to knock some sense into her”.

They then removed the website and left an apology there; www.unilad.com, and on their facebook page, where commenters pondered the best way to punish humourless, lesbian bitches like me. One in particular involves raping us to death.

Since Wednesday, at least one of the students has come under investigation by their University. They obviously want to distance themselves from the scandal, and are keen to show that the website isn’t a reflection of their campus culture.

They are perhaps a little optimistic. As a recent graduate I’d love to agree, and say that UniLad are a rare breed, that misogyny was about as common on campus as early starts and that the men are enlightened and respectful of women. Sadly, many students’ experiences don’t fit that narrative.

Whilst at University, I had the misfortune of meeting a ‘UniLad’ or two. They all had one thing in common- a complete and utter lack of any empathy for women. I’d go so far as to say that they didn’t think of women as people at all.

One of the first phrases you’re introduced to during Fresher’s week is Faffing. This describes sexual intercourse with a first year student (or, Fucking A Fresher). The phrase is used almost exclusively against women, normally by older students. There are several Facebook groups dedicated to the objectification of female students- one at my University was run by the male members of a society wherein they could discuss the female members, and any sexual relations they’d had with them. Rape jokes are two a penny, and women are constantly referred to a sluts and whores. Many of these so called ‘lads’ have real issues with concepts such as ‘personal space’ and ‘sexual autonomy’. Unwanted groping is par for the course on a standard night out.

What I’m saying is, sadly, there is a persistent and growing ‘Lad’ culture on our University campuses. UniLad is not that uncommon, and this is harmful, and dangerous to female students.

Last year studies showed that the attitudes of rapists towards women are reflected by mainstream ‘lads’ mags’. In fact, participants were unable to successfully differentiate between statements made by convicted sex offenders and those found in the likes of Nuts and Zoo. I can only imagine what they’d make of the articles found on unilad.com.

1 in 7 women will be seriously physically or sexually assaulted whilst at University. Rape is a terrifying reality for many female students. These so called ‘jokes’ on UniLad describe genuine experiences for women, and it’s important that this story doesn’t focus on one horrendous oh-so-funny comment about rape. It’s about an entire cesspit of hatred, bigotry, homophobia and good-old fashioned sexism, an entire culture summed up in one hideous website.

Women have to live within this culture everyday, wherever they go. It has no place in the hallowed halls of learning, on our streets or in our homes. Enough was enough for me. That’s why I called out UniLad, and why I’ll continue to call out others like it until we see the back end of Lad Culture for good.

[The image is a photograph of a large group of women at a demonstration carrying a large banner with the words RAPE: A GLOBAL PROBLEM. It was taken by Chris Hacking and is used under a Creative Commons Licence]