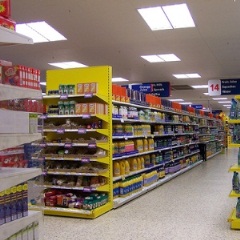 Workfare: yet more contempt from the government of the wealthy

Public anger over the government’s workfare schemes has quite rightly kicked off this week following the widespread online circulation of adverts for “jobs” in Tesco paying only travel expenses and JSA (jobseeker’s allowance). HarpyMarx has some great photos and video from the protest outside the Westminster branch at the weekend.

But it’s not just Tesco – hundreds of companies and charities are signed up to the scheme, which sees welfare claimants forced to undertake work experience or “mandatory work activity” or face losing their benefits. As Cait Reilly, who was forced to work in Poundland, is quite rightly arguing in her legal case against the government: workfare is nothing less than forced labour, and it needs to be stopped.

The government is arguing that these unpaid work experience placements are an essential step in getting people back to work. In an article in today’s Guardian, which reveals that the private company A4e sent jobseekers it was charged with getting into employment to work unpaid in its own offices, Cameron is quoted as saying:

…put a young person into college for a month’s learning, unpaid – and it’s hailed as a good thing.

Put a young person into a supermarket for a month’s learning, unpaid – and it’s slammed as slave labour.

Here’s the difference, Mr PM (and I can’t believe I even have to explain this). Colleges are designed specifically to equip young people with skills and knowledge to enable them to develop as individuals so they can make their way in the world. Supermarkets are designed to make a shitload of cash for a private corporation. When a young person goes to college, they are being provided with a useful service. When a young person goes to work in a supermarket, they are providing a useful service. Hence, in the latter case, they should be paid. Claiming that young people are learning when they work for free in these kind of companies is a piss take. When I worked in Tesco, it took me about ten minutes to learn to stack and face up shelves. Not weeks on end. There’s nothing wrong with stacking shelves, but we should damn well be paid for it.

Unemployed people don’t need work experience; they need jobs. And if companies need work completing, the obvious answer to both these needs is to employ those unemployed people and pay them a proper salary, NOT to force them to undertake that work for nothing. (Incidentally, I think this should apply to all forms of work – unpaid work experience and internships exploit young people and prevent social mobility.) But as long as companies can get away with paying people nothing, they have little incentive to take on salaried employees. Just check out this comment left under a Guardian article on the subject:

I personally know a fifty-six year old man who worked at Tesco for 40 hrs a week for 6 weeks for no pay. He said he was given the worst job, constantly filling freezers in the hope he would be taken on. After the 6 weeks were up the manager asked him if he would like to stay on for some extra weeks, my friend asked “with pay”? The manager said why would he pay him when he can pick the phone up and get more unemployed people who have to work for nothing of face sanctions meaning loss of ALL benefits for up to three years!

The government’s line of argument on workfare is a contemptuous joke, and we need to put as much pressure as we can on both them and the companies and charities supporting workfare so we can bring this disgusting practice to its knees. With twice as many women being made unemployed as men as a result of the government’s cuts, this is a cause that feminists really need to get behind.

Join the national day of action against workfare on Saturday 3 March.

Boycott Welfare also have a list of tips to help you avoid being forced into unpaid work.

Photo by Andwar, shared under a Creative Commons licence.