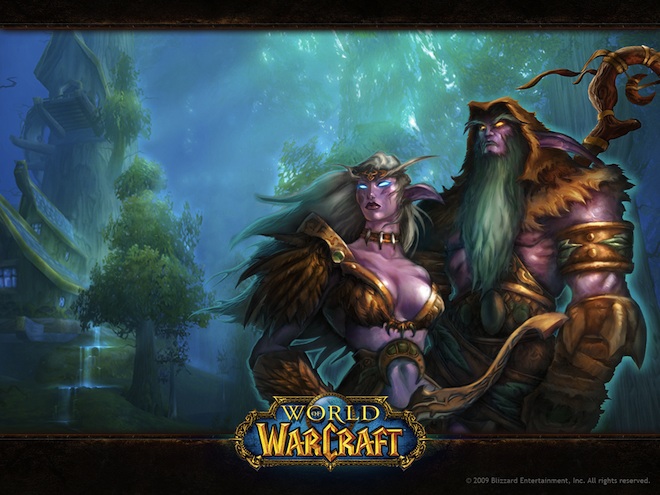 You’ll catch your death in that

World of Warcraft is probably the most successful computer game of all time. There can’t be many people who don’t know about it, even if they have no interest in gaming. And with 10.3 million subscribers world-wide, there’s clearly a great deal of people that not only do know about its existence but also play it …a lot.

Of course, whether these people enjoy the game is another matter. For a game as popular as WoW there’s a great deal of negativity about it on the internet. After each WoW expansion (the fourth one – Mists of Pandaria – is due out next year), a solid core of players rise up in a furore about how the game has finally jumped the shark and announce that they are to leave the game forever (until they return after a few months time having realised how cold and lonely the non-Azeroth world really is).

No accusations of jumping the shark from me. I still love the game. I’ve been playing for a number of years (just after the Burning Crusade expansion launched). I play Bravetank – a level 84 character (soon to be level 85 – I can feel it) and I write about it all on my Bravetank blog. So far so good.

But some aspects of the game concern me – or at least my own attitudes to them concern me – and one of these aspects is the issue of in-game female attire.

I play most types of character in WoW (since I’m an indecisive “alt-holic” for whom the grass is always greener on the other side) but my current character of choice is Paladin and my current role of choice is Tank. This means I’m a hard-ass “come and hit me if you dare” character.

I can take the blows along with the best of them (not the face though, please not the face), but I do require a healer to heal me – at least now and again. Despite the fact I am a hard-ass tank repeated blows to the head from a mace do tend to have a somewhat detrimental affect on my well being.

To be a tank you usually need to wear plate (unless you’re a Druid in which case you’ve got soft yet somehow sword-resistant fur to protect you ….what?…yes I know…). You also need a shield and something to hit people with. Just standing there and taking all the blows is generally frowned upon – although I’ve been known to make Bravetank do that while I go and get a cup of coffee.

Here’s an example of the kind of plate armour my character, Bravetank, gets to wear.

It’s interesting in so many ways.

1. Stunning colours – I really do love the glowing pinky/red but not sure that an auburn headed woman like Bravetank can quite carry it off.

2. While there are definitely hairdressers in WoW (you can go to the barbershop and change your hair style) there is clearly also a waxing service of some kind.

3. While it is made of plate, there’s not exactly a lot of it (putting it mildly). I mean, yes, her knees and shins are pretty well covered but generally speaking I think any enemy worth his/her salt would know at one glance the best place to aim their sword and they’d be looking a little higher than the knees.

4. The outfit looks very different on a male character – see it modelled on my husband’s paladin below.

Admittedly there is still a bit of midriff going on here – but very little, and the legs seem to have some extra coverage not found on the female set.

Now these are not the most extreme examples of the skimpy female clothing ever to grace WoW. There are other examples of what’s called the ‘plate bikini’ – which looks exactly as it sounds.

Nearly 99% of a female character wearing plate bikini is uncovered – and don’t forget they are likely playing a tank and so are expected to stand toe-to-toe with the enemy and take all the blows.

However, as WoW has developed, the worst excesses of the plate bikini style female costumes had been consigned to the game’s history. Or they were.

Because, although Blizzard, the company that makes WoW did have even skimpier clothes for female characters at the start of WoW, most of the newer armour sets look pretty much the same on both male and female characters and cover most vulnerable areas.

Even the back of the ankle- an area I have perceived as particularly vulnerable ever since I saw Hostel.

But that was all before Patch 4.3, and the implementation of transmogrification. Transmogrification allows players more choice over their outfits. Where previously the clothes a character wore were closely linked to their level (how far they had progressed in the game), now they can wear older outfits transmogrified to have the same higher stats of their higher level outfits without it affecting their performance. Giving players a lot more choice over how they look in the game.

[pulloutbox] I like conveying the idea she can be sexual and feminine and powerful and capable all at once without sacrificing any part of this. Is that wrong?

Before transmogrification if you looted a skimpy top, and it was an upgrade, you probably had no choice but to wear it because you needed the stats. But if anyone commented you could explain that you had no choice and even act all affronted by the developers who created the armour set. But now that’s no longer necessary, if you wear it, presumably, it is because you’ve chosen to wear it. And if you’ve chosen it that would suggest you like it. Some people feel very uncomfortable about revealing this.

I am conflicted. Part of me wants Bravetank to wear the outfit above – I really do like the colour! – but I feel guilty about it because of its skimpiness. Do I want Bravetank to be ogled and propositioned? No – not at all. Am I reinforcing ideas of women as sex objects by wearing such an outfit? I would hope not, but I don’t know. I like the outfit. I do. I like her femininity being accentuated in a tanking role, which requires strength and stamina. I like conveying the idea she can be sexual and feminine and powerful and capable all at once without sacrificing any part of this. Is that wrong?

I feel this same tension women feel in real life when considering whether it is wrong to want to look good at work? Is that a form of capitulation to outmoded ideas of women and reinforcing an eye candy versus leadership role in the work place?

I don’t know if I have a healthy attitude to my appearance or whether I’m shallow as hell. I don’t know what I should/shouldn’t think about my body any longer and I suspect I’m not alone.

There is definitely a part of me that thinks if my WoW character wears this gear she’ll look like a slut and be regarded as such by others. People in the game will think I’m promiscuous – both virtually and perhaps in reality. Yes – my character’s in-game appearance might lead people to draw conclusions about my character and behaviour in real life. This disturbs me hugely.

To paraphrase Darth Vadar, “The temptation to cover herself in sackcloth is strong in this one.”

Is it wrong to want to be both strong and sexy? I don’t think so – sexuality is an important part of our lives however much some of us might try to deny it. I think the real issue is perhaps the rather limited way in which sexiness is portrayed – usually an “in your face” exposure of female anatomy with no subtly, thought or creativity, and critically no clear link or connection to the strength and ability of the woman.

Appearance and skills are disconnected and polarised. Yet one’s moral, sexual, intellectual and physical being should be united – and each should play off, reveal and reinforce the other. It is that which we are lacking in the online gaming world. The skimpy gear is, in the main, limited and one dimensional. And even if one ascribes meaning and value to it (as I have with Bravetank’s look), those looking on only see skimpiness. Nothing else.

Can we expect the depth of character and sexuality described above to be conveyed in the armour sets in game and the looks given to male and female characters? These are merely games after all. Probably there are limits to what we can expect developers to do. But I think it needs to be looked at and explored, given the huge player base of these games and the powerful role games can play in shaping our perceptions of beauty, sexual attractiveness and female power.

We need to shift from one-dimensional, narrow and limiting portrayals of sexuality and attractiveness in game. We need to find a way to show that (for both male and female) sexuality and attractiveness is more than just skimpy gear and can in fact be something rooted in the strength, richness, complexity and wonder of our very selves – even our online pixellated selves.

Teri Shelly lives in Wales but this does not mean that she is an expert in all things Dylan Thomas. However, she did once play tennis in his famous Cwmdonkin Park. She spends most of her time trying to play a tank in World of Warcraft and then writing about it in her Bravetank blog. She reads alot and runs a fair bit, sometimes impatiently trying both at the same time. It never ends well.