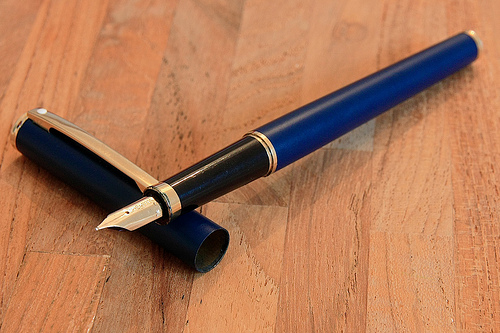 Image shows a fountain pen. Shared by jochemberends under a Creative Commons license.

Many thanks to Harriet S H and Breish Rowe, our guest bloggers for last month, for their contributions!

Despite its heroic leap year efforts, however, February has ended, which means it’s time to introduce our guest bloggers for March. Please welcome Libby and CP Reece! In their own words:

Libby earned her feminist stripes interning for the Fawcett Society where she was horrified by most of the stories she heard. An accidental activist, she is a regular contributor to BCN, the UK’s only 100% bisexual publication. Libby blogs about Children’s Literature at TreasuryIslands.

CP Reece is a retired Headteacher in her 50s: a feminist, naturist, fellwalker and poet. Her first degree subjects were English and Latin but she studied Gender and Education as part of her MA in Education Management. Retired after a 34 year career working in urban comprehensive schools, she is involved in campaigning for the rights of both women and naturists(of both genders), writing, walking and occasionally examining. She believes passionately that 1984 was written as a warning, not a blueprint!