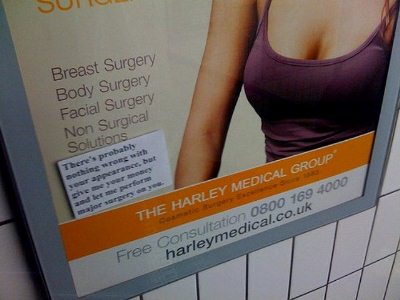 “There’s probably nothing wrong with your appearance, but give me your money and let me perform major surgery on you.”

UK Feminista have launched a campaign to ban cosmetic surgery advertising. The campaign is supported by Object, Rosa, the Women’s Resource Centre and both the president and president-elect of the British Association of Cosmetic Plastic Surgeons, among others. The text of the public petition is as follows:

Right now there are few restrictions on where and how cosmetic surgery providers can advertise their procedures.

The aggressive marketing tactics of some cosmetic clinics have got so bad that the British Association of Aesthetic Plastic Surgeons now support the prohibition of cosmetic surgery advertising.

People should not be involuntarily exposed to these harmful advertising tactics, whether in public spaces, in magazines or on TV.

Just as rules prevent prescription medicines being advertised in the interest of public health, we urge the Government to end the advertising of cosmetic surgery.

This is a complete no-brainer for me and I sincerely hope the campaign is a success. We should remember that women have a wide variety of reasons for undergoing the kind of procedures offered by these private cosmetic surgery practices (for example, a trans woman wishing to have breast implants is likely coming from a very different place to an insecure cis woman who thinks her breasts are unacceptably small), but this cynical, misogynistic propaganda has to end.

(While looking for an image for this post I came across the incredibly awesome WANG club tumblr, for Women Against Non-essential Grooming. Big hairy love it.)