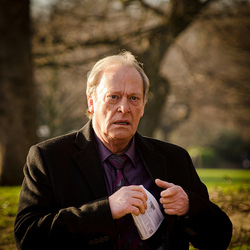 Dennis Waterman: “It’s not hard for a woman to make a man hit her”

Actor Dennis Waterman has come out and said that he punched his former wife, Rula Lenska. In an astonishing display of passive aggression, he takes no responsibility for his actions, instead blaming Lenska for being “too intelligent”.

In what he perhaps sees as a twisted compliment, he describes how, because she was cleverer than him, he found it hard to argue with her, saying,

“”The problem with strong, intelligent women is that they can argue, well. And if there is a time where you can’t get a word in… and I… I lashed out. I couldn’t end the argument.

“Something must have brought it on.”

Is she supposed to feel flattered by this? Or blamed. If she hadn’t been so intelligent, she wouldn’t have been hit? He is admitting punching this woman, yet still making himself out to be the victim. This is an incredibly manipulative way to attempt to justify his behaviour.

He also downplays her allegations of drunken abuse, in contradictory statements, like

“She certainly wasn’t a beaten wife, she was hit and that’s different.”

Going back to blaming Lenska, and apparently generalising his misogynist victim-blaming to other victims of domestic violence, he is reported to have said,

“if a woman is a bit of a power freak and determined to put you down, and if you’re not bright enough to do it with words, it can happen.”

Thankfully, the Mirror article reporting on this have pertinent and important quotes from Refuge, who point out that

“He alone is responsible for his behaviour”.

Needless to say, domestic violence is never the victims’ fault, regardless of whether they are intelligent or not, good at arguing or not, and a power freak or not. It is always the abuser’s fault, and no responsible and respectful adult should react with violence to their partner. Losing an argument and not being able to “get a word in” are just facts of life sometimes. Responding with your fists to someone you purport to love is never, ever acceptable. It’s as simple as that.

[The image is a photograph of the actor Dennis Waterman. He is a fair-skinned, older man and is photographed on set in a park and wearing a black jacket and purple shirt and tie. It was taken by Garry Knight and is used under a Creative Commons Licence]