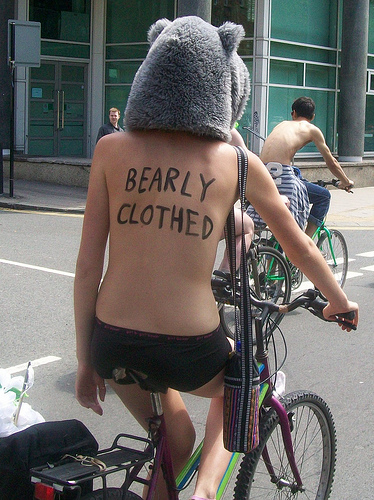 Go naked; it’s good for everybody (but particularly for women) (Part 1)

Image shows several topless people on bicycles, viewed from the back. They are taking part in the 2010 World Naked Bike Ride. One is wearing a furry hat/mask and has the words “BEARLY CLOTHED” across her back. Shared courtesy of anemoneprojectors under a Creative Commons License.

This post is the first part of a 2-part piece on naturism.

A couple of weeks ago I was an observer at the trial of Nigel Keer at Leeds Magistrates Court. Nigel was convicted, and fined, simply for going on a ramble across the local moors at Otley Chevin, naked except for walking boots and a rucksack. He was afterward featured as “the naked rambler” in the press.

The trial was a travesty of justice and proved my old maxim that there is no justice, only law. Why? Because Nigel is a naturist, who sees going for a ramble on the moors as nature intended as entirely reasonable and normal, as do many naturists all over Europe. The fact that he was convicted when so many people who really hurt others get off showed just how low we have sunk as a nation in terms of natural justice.

Furthermore, Nigel was convicted on purely circumstantial evidence, as shown in the testimony of an off duty police officer who arrested him when meeting him on a run across the moorland. That testimony hinged on the presence of a woman, a woman who may have been distressed or alarmed, which was enough to convict him under the Public Order Act. This Act was meant to control riots and other anti social behaviour, not naturism, but it was used in that way in court. The woman did not come to court to testify; she made no complaint to the police; she was not interviewed, spoken to nor ever identified.

The verdict offended me deeply as a woman. I would be appalled if someone were convicted of a crime on the basis that a male police officer decided what I had thought and felt. As a lifelong naturist, I would see a male naked walker, especially one wearing boots/rucksack and walking on countryside paths, as just that, a naked walker, probably also a naturist. He wasn’t flashing (you can’t really flash naked!) nor was he bothering anyone or drawing attention to his body; he was just walking.

I have been a naturist virtually all my life. My first memory of feeling that being without clothes was normal and natural, and my utter puzzlement at the prudery around me, dates from the early 1960s when I was about 7. Until then, like most young children I had always run around naked on a hot day, in the garden or on a beach, but my mother clearly felt that I was now too old to do that, and called for me to come and get dressed behind a large towel.

Refusing to do the towel dance, I asked why. (I was always asking “why” in a loud voice, and wouldn’t accept “because I say so” either.) When my mother tried to explain that it was “because people might SEE you” I was utterly bewildered and ran off naked down the beach, having to be chased, caught and chastened! But I didn’t understand, and still don’t. What is wrong with a child’s body? What is wrong with anyone’s body? Everyone has got one!

I went home that day feeling that all adults had the wrong end of the stick, but by the time I was 18 or so, began taking the opportunity to sunbathe nude or skinny dip when the weather and the environment were appropriate. First sea bathe was on the remote central area of Druridge Bay in Northumberland, in the hot summer of 1976, but there were many quiet dips in mountain streams or pools, and sunbathes in secluded places. I was quite body conscious then despite my liberal instincts, so tended to hide away, but as I grew older I met other naturists and realised that was what I was, a naturist. I introduced my husband to naturism (it’s often the other way round, but hey..) and have been on many naturist holidays. I attend a local naturist swim and am a member of naturist organisations.

A while ago, I was forced to retire earlier than I wanted to. I was at the top of my profession. One of the reasons is that my employers found out I am a naturist. It was a lot more complex than that, but basically they took the word of a bigoted male neighbour that I was guilty of wrongdoing. This blog is not the place to go into that whole fiasco in more detail, but it set me thinking about naturism and feminism.

The bigot next door objected to me, as a slightly overweight middle-aged woman, being naked in my private garden, even though to see me required intrusion on his part. It dawned on me that what he really objected to was that I wouldn’t stay in my place. A woman in her 50s who has the body confidence to be a naturist is emphatically NOT in her place! And I am not on a diet. I eat healthily, exercise regularly and enjoy the feel of the sun and air on my body, which I’m not ashamed of. But the repression of healthy nudity, and its equation to illicit sex, is a common means of control of women by patriarchy.

To be continued in Part 2…