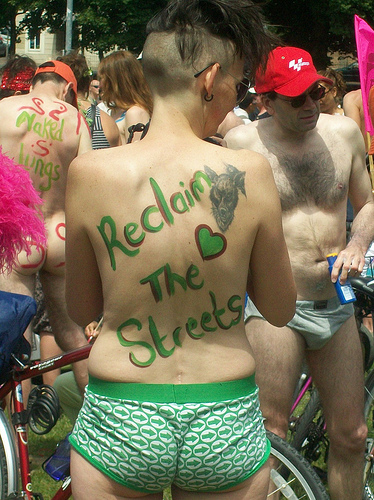 Go naked; it’s good for everybody (but particularly for women) (Part 2)

Image shows a group of participants in the 2010 World Naked Bike Ride in Brighton, in various levels of nudity. The words “Reclaim the Streets” are written across the back of one person. Shared by anemoneprojectors under a Creative Commons License.

This is the second of a 2-part piece on naturism. Part 1 can be found here.

Naturism is not about sex or sexual misconduct. Sensual, yes. The freedom and relaxation felt by naturists as they lie in the sun, or walk in the natural environment, or bathe in cool water, has to be felt to be believed. Bathe without a costume (they’ve only existed for about 150 years and they were invented by men to control what women wear and what women see) and you’ll never want to wear one again! And in a naturist environment or event, a man who, for example, walked around displaying an erection or harassed woman or other men, would soon be thrown out never to be allowed back. Naturism is about freedom, equality, and total acceptance of and respect for others and yourself.

It’s odd, isn’t it? Women can get their tits out for Page 3, but they’re frowned upon if they walk about topless or naked, or often if they breastfeed their baby in public. Limitations on female nudity by men go hand in hand with a male acceptance of pornography which demeans women as sex objects for men, and keeps them in their place. Naturism does not: it equalises men and women.

To control female nudity or even toplessness, to accept pornography as normal, and to impose severe fashion limitations on women, are all patriarchal norms. Together they form a pattern of male repression centred around unacceptable male expectations of women and their place in society. A few weeks ago, in the Channel 4 documentary “My daughter the teenage nudist” (appalling title, but interesting exploration of young people taking to naturism) a young woman and a young man were distributing leaflets topless in Manchester. A police officer told the woman, but not the man, to put her top on. Why?

There is actually no law in this country against being topless or naked, in either a public or a private place. The law falls back often on the Public Order Act, as it did in Nigel Keer’s case, arguing that the likelihood of someone being alarmed or distressed makes the nudity illegal even though it is not illegal per se. This is wrong. In the case of this young woman, the law was being misused by a man to repress her. It was illogical. You can use female breasts to titillate, to sell drinks in bars, to appeal to men in lads mags, but you can’t simply walk around topless on a warm day like men can. Men have the right to enjoy the breeze, the sun and the water without a top; women do not. Few men would be willing to give up this basic right: why should women? To require women to cover up their breasts in public is a highly visible expression of patriarchal control. Inappropriate in the street, but ubiquitous in advertising and pornography! Naturism, on the other hand, breaks the repressive power of pornography over women by granting them body equality with men whatever their shape or size. There are few size zero naturists that I’ve seen in the last 40 odd years; if there are, they’re shaped like that naturally!

In a naturist environment both men and women accept each other as they are. People come in different genders and in all shapes and sizes. People who have had operations and have scars, artificial limbs, mastectomies etc are just accepted. They do not feel self-conscious. And ladies: textile men may talk to your breasts: a naturist man looks you in the eye!

There are other ways, too, in which naturism is especially good for women. Prudery, not nudity, harms children and young people. Young children are never conscious of nudity, seeing it as natural, until an adult prude gives them a self conscious and repressive feeling of guilt about it. This often leads to young people growing up with body image problems. Add to this the power of the porn and advertising industries, and you have a recipe for attitudes which damage the mental, physical and sexual health of young people, especially girls and women. It is women who feel they must diet to reach the shape and size the industries demand. It is women who suffer most from related eating disorders.

Britain has some of the worst outcomes in the world for eating disorders and poor sexual health: early intercourse, STIs, teenage pregnancy. The prudery of a minority (often men) who seek to control our behaviour is related to this. In countries like Denmark, Sweden, the Netherlands and Germany, where attitudes to the human body are much more open, the outcomes for these things are the best in the world. And, no coincidence, in these countries a naturist lifestyle for men and women is regarded as healthy, normal and wholesome. We are hurting young people with our prudery, especially young women.

Recently there has been a spate of arrests for being naked, often of men, though occasionally of women. The prudish assumption is often used that someone might be offended/alarmed etc, especially women by men. The patriarchal judiciary establishment seeks to control nudity because there is this feeling that it spells some sort of rebellion, and of course women must be “protected” from it because after all men should control women by protecting them. The mystery woman in Nigel Keer’s case with her “disgusted frown” may have been worrying about the leak in her roof for all we know; she never spoke to anyone nor complained. But a police officer and a judge accepted that she was “likely to be distressed” at the sight of a naked man. This is a deeply flawed and institutionally sexist assumption.

The fear of rape lurks under this assumption. I am not seeking to comment on rape, except to say it is never about nudity; it’s about power, misuse of male power over women, and misuse of the sex act which in itself is natural, normal and wholesome. That’s what makes rape such an appalling crime, but it has nothing whatever to do with the way women or men dress, or don’t.

Men have commented, even in the court, that a woman walking naked would be less likely to be convicted. That may be true. Few do so, but there have been arrests of naked women too. It is also true that a proportion of gay men are naturists, so perhaps there’s an element of homophobia bubbling under the surface in juridical attitudes to naturism.

What is it, though, about this country and nudity? It’s as though we can only accept the naked body if it’s sexualised. There is an increasing groundswell of protest from naturists about the way they are sometimes treated, and I’m part of it, but I have to say it’s largely a male protest, and is in danger of manifesting itself as yet another repression of women. Years ago I became a more radical feminist because though intellectually I believed that rational argument and influence would win the day, my less cerebral reaction to experience was that only radical action and protest would win equal rights for women. I’m beginning to believe the same about naturism. Rationality and argument/influence can only take you so far. Look at what happened in the gay community. It was only with Peter Tatchell and Stonewall that gay rights started to become reality.

Naturists are often treated as gay people used to be (and still, like women, are in some places, even though both have Equalities Act protection.) We too should have that protection. And I’m getting tired of men defining what I can and cannot do in protest and in fighting for my rights. Should we be pussyfooting round a minority who are “offended” at what is natural? Do their own bodies offend them? And wasn’t it Peter Tatchell who said, “If offending others is accepted as a basis for prosecution, most of the population of the UK would end up in court.”

So I’m looking forward to the summer. I shall be sunbathing in my garden. I shall be skinny-dipping and using naturist beaches. I shall be at Nudefest in Cornwall in June. I shall be naked, because it’s good for me, and all of us.