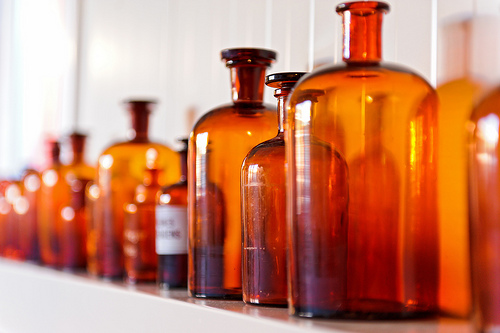 How dare you make life harder for mothers and children!

under a Creative Commons license.

Yesterday I got upset in a pharmacists’, because the patent medicine that always works for my daughter when she has a bad cold has been withdrawn.

When I asked why, I was prevaricated with, fobbed off and lied to, mostly by male pharmacists. I tried 5 different shops; same result. So I cried, because now my daughter must suffer, and as her mother I suffer when she does. Because men said so.

Somewhere, some EU or Government committee, comprised of mostly male vested interests, has decided that something that works in alleviating the symptoms of a bad cold, and making life more bearable for children and their mothers (who, let’s face it, are the ones who are usually there when a child is ill) must be withdrawn. Oh, and they have also decided that one of the reasons for its withdrawal is that too much might be harmful, or a dose in combination with other over the counter medication might be harmful, and that mothers are too stupid to realise this even if advised, and will over-medicate their children. Because they’re women. And women are stupid, aren’t they? And we must protect women from their own stupidity, mustn’t we?

Of course, I was told that “it’s for your safety and protection”. Classic response when patriarchy has made a decision that might just affect the well-being and comfort of women or children. Women aren’t clever or responsible enough to follow guidance on administering over the counter remedies, are they? So we must withdraw anything that actually alleviates pain or other nasty symptoms, because they might get it wrong. Are these remedies actually harmful? Have we been unwittingly over-medicating our children for years, or is it just more faceless state control and distrust of parents, especially mothers?

There has been a thread on the Mumsnet site about the sudden withdrawal of Medised, a children’s over-the-counter remedy for colds which contains paracetamol and an anti-histamine to unblock noses. It used to be recommended for children of all ages; I’ve given it to my daughter since she was a baby, always following the guidance on the enclosed leaflet especially about dosage and not combining it with other remedies. Gradually, as she has grown older, its usage has been forbidden for under-2s, then under-6s, now for anyone. Yet she and many of my friends’ children have used it occasionally all their lives without any ill effects. And none of the children’s mothers have managed to get it wrong.

But these faceless committees know better, despite the recommendation of many GPs to parents that this particular remedy is highly effective in helping children cope with the symptoms of a bad cold. You’d think GPs would know what they were talking about, wouldn’t you? But no, the committee rules supreme, again.

Interestingly, one of the side effects of the withdrawal of any over-the-counter remedy is that some people find out quickly and stockpile it; I’ve become aware of this particular one on offer for sale at extortionate prices. Interesting also to note that in Spain, for example, everything except antibiotics is available over the counter. Almost all remedies are stronger than in the UK and cost a fraction of a prescription charge.

If unable to go to Spain or other countries with similar policies on over-the-counter sales, people often buy remedies (drugs, after all, they’re all drugs) on the Internet. In the USA, people can buy a much wider variety of medicines over the counter; in the land of the free, the public demands no less; and Europeans can order on the net. Mostly this will be safe, but there’s always an element of uncertainty, if you buy drugs on the net, over what you’re getting. I’d do it for myself, but not for my child.

So what will mothers do? Well, we could clog up scarce NHS resources for what are, after all, minor ailments. Go to our GPs or A&E over any illness, when in the past we’d have dosed our child with an over-the-counter remedy and only consulted the GP or a hospital if the illness became worryingly severe. I bet the patriarchal committees will be very quick to criticise us for that approach!

In the past 10 years, there has been an increasing “elf and safety culture” approach to the work of these faceless committees who decide what we can and cannot buy to make our lives a bit easier if we, or our children, suffer from minor – but nevertheless distressing – illnesses. It’s senseless, given the shortage of public funds and the demands on the NHS. And it affects women more, because they are the ones who nurse sick children and they are the ones who cannot be ill themselves when they are often running homes and careers, or caring for others, in disproportionate numbers.

But most of all, this approach assumes that we are all stupid, that we cannot understand guidance, that we need to be not only told what to do, but also forbidden to do or have anything which might conceivably harm us in any way. Life is not risk-free, and we all need to make intelligent decisions based on acceptance of some risk.

But try telling a patriarchal committee that, especially if you are a woman.