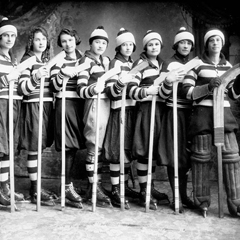 How responsible are women for their sexualisation in the media?

A recent article in Aftonbladet (with an accompanying video that can be viewed here) revealed that the female hockey team the Vancouver Ice-O-Topes are doing a half naked (and quite highly sexualised) photo shoot in order to financially support their team. Their reason: “because they love hockey so much”. The Vancouver Ice-O-Topes are, however, not the first team to do so. For example, in 2010 a New Zealand women’s rugby team produced a nude calendar in order to draw more women to the sport and to disprove the myth that rugby is “unfeminine” (implying that a good way to prove one’s femininity is to take your clothes off to reveal that your body is in fact feminine, whatever that means). In 2012 the Bristol University netball players also took their clothes of in order to supplement their sponsorship. Other sports women who have posed in little or no clothing in order to promote themselves include female high jumpers, boxers, swimmers, volleyball players, figure skaters, kayakers, tennis players, and many others. But, the sexualisation of female athletes in calendars and photo shoots does not appear to now be enough. In recent years, an American Lingerie Football League (LFL) has been established in which women play tackle football in their underwear.

We have often thought about how women themselves support the ideals present today by lending themselves to sexualisation. Without women willing to model for highly sexualised or half naked photo shoots, these images would probably not exist. Obviously, not all women perceive the sexualisation of women as a problem, but we feel comfortable stating that many women do feel that the expectations placed on women’s appearance and the persistent and rampant sexualisation of women is troublesome, irritating and at times even depressing.

The question we as women have to ask ourselves is: How responsible are women for their sexualisation in the media? Can we blame the media, patriarchy, the advertisement companies, and so on without placing some blame, or at least questioning our own involvement in the stereotypical ideals that are presented in the media together with the often highly sexualised and sexist images of women? Should we also stop idolising women who lend themselves to sexualisation and thereby support and encourage these ideals? These are tricky questions to deal with because owning one’s involvement in the promotion of sexual ideals of women and a certain appearance is uncomfortable. Women should of course be able to freely express their sexuality. However, do these types of glamour pictures express female sexual empowerment or do they simply provide another method to gain attention or to make money through the sexualisation of women?s bodies?

Secondly, how are women’s sports ever going to be taken seriously when these women draw attention not to their skills but to their bodies and their appearance? Sure, an underwear calendar is going to draw attention to these teams but the focus will not be on the players and their skills but on which woman is more attractive or how attractive the team is overall. It is true that female athletes often receive fewer endorsements, and less media attention, than male athletes and therefore may look for other venues to increase financial support. Due to the sexualisation of women in our culture, appearing in calendars and photo shoots may be a profitable way to increase revenue. But we have to ask ourselves if the sexualised attention takes away from the credibility of the sport, while depicting female bodies as sex objects rather than strong, competent bodies that deserve attention because of their skills and dedication. How come these talented women resort to nudity and using their bodies in order to promote their sport, which is so unrelated to nudity, appearance and attractiveness? Is taking one’s clothes off really female sexual empowerment or is it just another way of gaining popularity through exploitation of the female body since these types of photos are in no way new or inventive, or even aimed at a female audience (despite what the players in the New Zealand rugby team might claim)?

Opinions may differ considerably concerning this issue but we feel that these half nude shoots are in many ways telling people that nudity and exploitation leads to success and is a good path to explore in order to increase popularity. It becomes a sort of attention seeking behaviour that is in many ways detrimental to how all women are viewed. It also promotes beliefs in the biological differences between men and women by pointing to women’s bodies, not as strong, but as sexual objects that are foremost attractive and sexualised before being competent, strong, fit or successful.