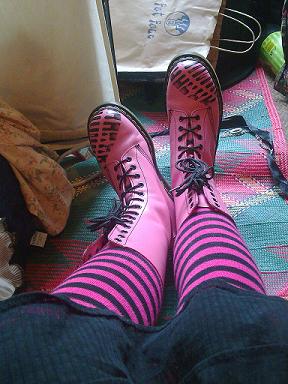 Music paste up: The twin issues of women and the music press and women music journalists get two media discussions, plus Björk, Laura Gibson and Annie Lennox

To begin this paste up I’m in the uncomfortable position of needing to plug myself or, more accurately, things I’ve written for the F-Word… no, please, don’t run away… there’s a Björk video coming up by the end of the post, and you wouldn’t want to miss that…

I’ll be brief anyway, and just say that the excellent Charlotte Richardson Andrews, deputy editor of Wears The Trousers, has written a brilliant piece for The Guardian about women artists and their treatment by the music press. Also that this week marks the 60th Anniversary of the NME, and todays Woman’s Hour featured a discussion on women and music journalism chaired by Jenni Murray and featuring Caroline Coon, Lucy O’Brien and Krissi Murison.

I didn’t interview Krissi Murison for my piece on women and the music press, though I would have liked to (I could go into why I didn’t but it’s a long and frankly tiresome story) but I did interview Caroline Coon and Lucy O’Brien for the punk women series and people who enjoyed that series and the more recent women and the music press piece will no doubt find Charlotte’s piece and the discussion on Woman’s Hour most interesting.

Now, here’s that Björk video I promised you… this is new from the Biophilia album…

While reading The Guardian I also noticed that the music blog

today was The Other Woman,a blog devoted to “featuring a genre-defying selection of new music by women artists” and run by Ruth Barnes. A woman worth keeping an eye on I reckon.

Here they are in action

And here’s some ESG

The newspaper also has an interview with Annie Lennox, in which she talks about feminism and is asked the Rihanna question amongst other things.

Elsewhere it’s been announced this week that the seemingly inexhaustable Laura Gibson will be returning for some UK dates in April:

You can get a preview of the forthcoming single ‘The Fire’ here:

It’s free to download from Soundcloud, but will be officially released to coincide with the tour on the 9 April

Have a happy and safe intenational women’s day.

Image shows photographer wearing pink and black stripy tights or leggings with pink and black Doc Martens. It is by Mwezibou, who remarks in the caption under the photo on flickr that they are breaking the boots in for a friend. It is shared via a flickr creative commons licence

This post was updated at 21:43 on 9 March to swap the word ‘lame’, which is discriminatory, for ‘tiresome’, which is not. Apoligies for any offence caused.