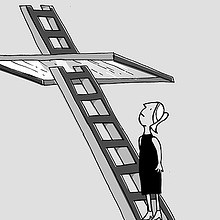 Smashing our heads on the glass ceiling: what Public Service in the North does to intelligent women

Image shows a cartoon of a woman, standing on a ladder, looking up at a glass panel blocking her way several rungs up. Shared by Jorge Balarezo under a Creative Commons license.

It isn’t a formal club, but there are a number of us across the north of England. Some of us were Head teachers, some ran other public services. We’re all middle aged. We’re all highly intelligent and were good at our jobs.

And we were all forced out, one way or another, before we wanted to go, and often in circumstances that a man in the same position would have survived.

It’s said in the North that a clever woman’s chances of promotion in public service exist in inverse proportion to the number of ex-miners on local councils and governing bodies. I was “warned” of this fact early in my career, by a woman who had been prepared to keep moving home to be promoted. I resigned myself to either moving or driving great distances (I settled for the latter, adding considerably to my working week) in order to get on. Of course, this factor discriminates against women with families from the start. Most women in my position were either single, childless or had children very early in life who were now adults, but the latter were few and far between.

The other saying I absorbed was that for a woman to be promoted in public service to the same level as a man, she has to be three times as good. Fortunately, this is not difficult.

I got the top job, at 40, with a 15 month old baby. I worked in 2 schools in disadvantaged areas, which was always my choice. Many of my friends and acquaintances succeeded likewise. I’m not saying it happens to everyone; there are many sisters out there still doing the business. But a disproportionate number of us were ousted. And they seem to have a few factors in common.