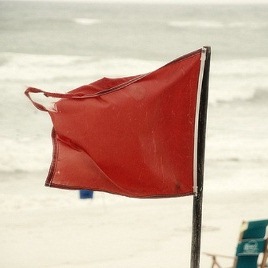 Trigger warnings are nothing to do with censorship. They give people more choice, not less.

Guest blogger Louise McCudden explains what trigger warnings are and why we should all be using them.

Louise McCudden discusses the importance of trigger warnings. Lou lives in London, and blogs at Left Eye Right Eye, where, depending on her mood, she either writes calm, balanced objective blogs about UK politics, or else rants about sexism, homophobia, mental health, welfare reform, and human rights.She tweets as @LouMcCudden.

It’s a small but important win in terms of awareness for the causes of both feminism and mental health that “trigger warnings” are now reasonably common online. Yet they’re not used by the majority of bloggers, and show no real signs of moving beyond the blogosphere. Not only that, but they are often met with curious levels of resistance, even derision, from entirely sensible, compassionate people. It matters a great deal, and we should say so, because trigger warnings are invaluable. They allow a little bit of control over what you choose to look at; enough to make all the difference between participating in communities, discussions, blogs, and other life-changing support networks, or avoiding them. Support networks are lost to victims, and important voices of experience are lost to the support networks.

“Triggering”, of course, usually happens as a symptom of Post Traumatic Stress Disorder (PTSD). Anyone suffering from PTSD – whether they’ve been officially diagnosed with it or not – will understand what “triggering” is immediately, but the more painful the trigger, the worse it is to explain, so we’re often left with a vague argument about “offensive topics” versus “freedom of speech” which is, although interesting, almost entirely irrelevant to trigger warnings.

A call for trigger warnings is not indicative of moral outrage, humour failure, or a plea for censorship. Triggering is more like a chemical reaction, or a phobia, than personal distaste. It’s not moral, or emotional. It’s medical.

Sometimes it’s explained like this. If there’s a trauma you’ve had trouble processing, vivid depictions of similar traumas can remind you of it. Well, yes, they can. But this, while horrible, isn’t quite what triggering is. When something triggers repressed memories, they stream into your consciousness without your consent. It doesn’t just remind of you what happened; it actually makes you re-live it. You feel like you’re experiencing the incident again, in real life – until it stops.

It’s nothing to do with being offended, or having hurt feelings. If you suffer from PTSD, you probably handle being extraordinarily “upset” most days without so much as a sneeze. But the impact of being hit with an unexpected trigger is much worse than being “upset.” You might feel sick. You might get a migraine. You might shut down emotionally, you not be able to stay in control of your temper, or your tears. You might black out momentarily, or even forget who, or where, you are. When that happens in a controlled environment or in a safe place with people you trust it’s bad enough but if it’s happening in the middle of the street, or in a meeting, or when you’re standing on the tube with strangers in your personal space, or on a date, or in a job interview, or when you’re babysitting, or when you’re driving, or…?

Identifying something as a potential likely trigger is not the same as passing a moral judgment, and nor is it a call for the item to be censored. Writers who handle an issue like rape sympathetically and intelligently still often choose to carry trigger warnings, because they know that acknowledging a potential trigger is not a value judgment on the content. You can absolutely love something, but still find it triggers for you.

And content warnings aren’t a radical concept. Films, video games, even music albums carry advisory labels; news readers tell you if the report coming up might distress you, so it’s not like we don’t already understand and accept the idea anyway.

All trigger warnings do is acknowledge that there are different sorts of horror, and they’re not all measurable by things like age. If a record label is going to warn me that Eminem will use a swear word, why not warn me that he’s going to depict a rape scene? If Facebook is going to protect people from breastfeeding images in case we find those offensive, surely they could warn us if we’re about to click on a page with vivid rape stories, in case that makes us unwell?

So trigger warnings are nothing to do with censorship. If anything, they’re the opposite of censorship. If you’re interested in free choice and free speech, then trigger warnings are a way to protect those principles. Giving people a trigger warning is simply giving them information. Not giving one because you didn’t think of it or didn’t know about them is different – I’ve done that myself. But knowing about them, and choosing not to use them, because you have an idea in your head about censorship and freedom? That’s just deliberately denying people information that might help them make an important choice. And there are loads of reasons why people might do that, of course. But none of them have anything to do with freedom.

Photo by Bob AuBuchon, shared under a Creative Commons Licence.