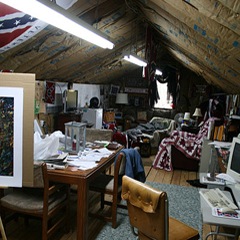 Last year, IKEA opened up a new store in Melbourne, Australia. As there are IKEA stores worldwide, the opening of a new one is not necessarily newsworthy, but there was an important addition to this one. It came equipped with a “manland”, a special department for men who do not wish to join their female partners during shopping. Instead, the manland offers amenities for men, such as being able to play Xbox, watch television and eat free hotdogs. But IKEA is not alone in its assumption that men, not women, need a gendered space to call their own. DIY network, known for their home improvement shows, launched a television show with the title Man Caves, in which two construction savvy men help a third man put his man cave dreams into reality.

A description of the show states that:

Guys need an exclusive space to hang out in their homes – a refuge where they can enjoy what they love, whether it’s a soundproofed basement used as a rock’n’roll lounge and adorned with limited edition guitars; a room where diehard ski fans can chill out with a roaring fireplace and alpine atmosphere; or a lush golf-lover’s paradise, featuring a state-of-the-art virtual reality driving range, media center and top-notch equipment storage space.

We hold issue with the belief that men need a segregated space apart from women, a refuge, a no-women-allowed zone, while no equivalent of a man cave is ever mentioned for women. It thereby implies that women do not need or deserve such a space. The underlying assumption appears to be the fact that men need space to wind down, to spend time with friends and to relax after a hard day at work. The man cave needs to be a place in which men can escape, be on their own, away from their partner or children, and from everyday stresses. This is quite a privileged belief. Often the preferred man cave encompasses quite a large or luxurious area, such as the basement, equipped with a flat screen TV and other expensive items. It seems unfair that men should have their own private domain in the house/flat that they share with their partner or family. Women (especially those who have children) rarely have the time to chill out in a woman cave or to take a timeout from the family in order to spend some quality time on their own, even if they need it.

This notion of a man cave is not only expressed on Man Caves. Another television program also aired on DIY network, focusing on first time homebuyers looking for property, depicted a similar worry about a man getting his own space. A couple with a young child expressed their wish list for their new house. Except for the usual amenities, the man also wanted a man cave. At the end of the show they settled for a house that did not have an isolated man cave. The man then said: “I didn’t get my man cave”. His partner then stated: “But you did get a family room”. Even though this man had a partner and a small child he was upset that he did not get that dreamy man cave. For him, the prospect of spending time with his family in their new home did not seem enough. He wanted his man cave, seeming unbothered by the fact that his partner did not get a woman cave.

What is it that make men believe that they need or deserve a separate space just for themselves? Because the term man cave implies that this man is in a relationship, or even has children. If he was single, living in his bachelor pad, there would be no need for a man cave since his whole pad would be a man cave. If many men believe that they deserve their very own space, why not extend the same courtesy to their partners? Perhaps they assume that their partner does not need that same private time and space as they believe they do. Where do these feelings and assumptions come from? So where is my woman cave? Am I important enough to ditch (if only for a little bit) my daily responsibilities in order to spend some ‘me time’ away from everyone else in the very space my partner and I share together? Why is there an assumption that it is okay for only men to enjoy such a privileged space? Whatever the reason might be it is gendered in its assumptions.

Not only is this notion gendered, but it is also based on stereotypes of domestic women and reluctant men. On Wikipedia, the need for a man cave is described as the following:

While a wife may have substantial authority over a whole house in terms of design and decoration, she generally has no say about what gets “mounted on the walls” of a man’s personal space. Since it may be accepted that a woman has input on the decoration of the rest of the house, a man cave or man space is in some sense a reaction to feminine domestic power.

It also states that: “Man caves have multiple purposes: they’re a place to be alone, to be away from women and from female sensibilities, to indulge in hobbies, and to hang out with male friends. It is, loosely, a male-only space to retreat to”.

This definition appears to imply that women receive substantial power, authority and satisfaction solely from decorating, designing and keeping the home tidy. But does that implied satisfaction and authority relinquish her rights to use and partake in hobbies in the man cave? It is a gendered assumption to assume that when in a relationship women ‘take over’ the home, creating a frilly and feminine space that is forced upon the man, in which the man has no other option than escaping to his man cave. Assuming that women’s authority lies within the home while at the same time distancing men from the home supports both stereotypes and the need for a man cave. Feminine domestic power does not sound nearly as fun or relaxing as doing whatever one’s heart desires in a man cave. Female authority in the home sounds much more like work than fun in the man cave.