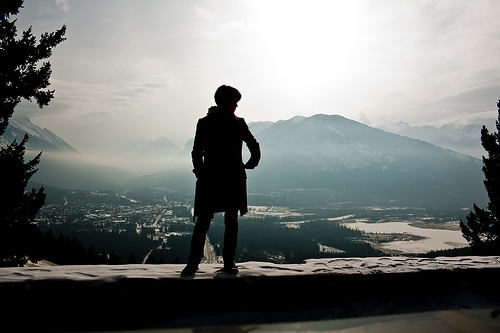 Image shows a snowy scene. In the foreground is the silhouette of a woman standing alone on a low wall. Mountains stretch in the background. Shared by Gavin Schaefer under a Creative Commons License.

Does anyone remember Jo Chandler? Google her, and you get one reference, and one deleted story. She was a lone female walker who was viciously attacked, probably by a man, near Catterick Bridge on the Coast to Coast long distance route in summer 1990.

The story was featured widely in the press at a time just before universal internet press coverage, which may be why you can’t find it now. Featured for a few weeks, it then vanished. We never found out if she recovered from her serious injuries. We never found out whether or not her attacker was caught and brought to justice. (I assume not.)

What was memorable was the Police advice to women: do not walk alone. Reading the recent F Word blog post about Government advice to Canadian women travelling alone, I was vividly reminded of that time period, when I did an annual long distance footpath on my own, and came under heavy pressure from friends, family and officialdom to cease my lone walking activities. Of course I resisted, and am still a regular lone walker, just back from a few days in the Lakes.

Blame the victim, curtail the victims’ freedom, and not a word about catching the perpetrators! Obviously things haven’t changed very much in the last 22 years!

I completed the Coast to Coast footpath alone in 1988, travelling from Robin Hoods Bay on the east coast to St Bees on the west (the wrong way, which gave me extra pleasure!) In fact I’ve been considering doing it the “right way” (west-east) soon. Since then I have completed 12 long distance footpaths of between 160 and 300 miles, and numerous day walks on moors and mountains, always on my own, and always with great enjoyment. And I have never felt unsafe, once. The only thing that scares me on a long walk is farm dogs, or the ill-trained dogs of irresponsible owners who think it’s alright to let them molest other walkers despite the fact that they have no control over their pets, who will not come when called.

Jo Chandler was attacked not on a remote moor or mountain, but on a lowland field path near a busy motorway bridge. But that didn’t stop the “authorities” declaring that remote moorland and mountain walks should be out of bounds to solo women, lest they cause trouble for us all by getting themselves attacked.

Why do men attempt to curfew women when such attacks happen? Why not ban solo men; after all, female walkers don’t attack men, much. The press and the police in particular created a climate of fear after the attack on Ms Chandler, which seriously deterred women from walking unaccompanied for several years. When I wrote, in 1991, to The Great Outdoors magazine, protesting at this and arguing that as men are the attackers, it is their freedom, not that of women, which should be examined, they reacted with a sexist editorial response which has caused me to boycott them for 21 years.

Why walk alone? I could refer you to the master of lone walking and writing about wild places, the late Alfred Wainwright, who wrote of the joys of lone experience in the mountains and moors. But he did not consider women “capable” of appreciating hill country the way men do! Much though I love his drawings and writing about mountains, I’m glad I never met the man. We probably would have come to blows!

That’s all right for men, of course. But after 30-odd years of solo walking, both day walks and multi-day long distance trips, I can count the other lone women I meet on my fingers, and often they are from other, more enlightened parts of Europe. I don’t count Julia Bradbury either; she walks with a dozen camera crew!

It’s not just the walks, either. I always used to stay at Youth Hostels because, firstly, I had no money and they’re cheap, and secondly, they are very egalitarian and don’t differentiate between male and female, young and old, gay and straight etc. Everyone is welcome to stay there and enjoy the countryside: alone, in a family or in a group.

But there comes a time when a girl wants a bit more luxury, and there are all sorts of obstacles in hotels, guest houses and the like. Single supplements, guest houses who assume you’re going to be male because you’re on your own, and make you feel uncomfortable when it turns out otherwise, and hotels who have all sorts of sometimes unconscious ways of making you feel uncomfortable as a lone woman, while lone men are taken for granted. The table you get in the restaurant, the look you get in the bar (and the length of time it takes to get served), the remarks from staff who seem to accept that it’s OK for a man to travel alone but keep asking questions, about who is joining you, of a lone woman. There was one hotel in my favourite stamping ground, the Lake District, namely the Derwentwater in Portinscale near Keswick, who were totally accepting in every way of solo women, and where I felt so comfortable that I went there on every trip to the Lakes, 5 or 6 times a year. But then they were taken over by a chain, Shearings, and all the unconsciously sexist assumptions about solo women started to manifest themselves in new staff behaviour. The food deteriorated, too. So I stopped going.

But I shall always walk alone. The beauty of the mountains, the palpable silence, the peace and solitude are vital to me. The joy of making my own route, of stopping when I want, of marching fast or wandering slowly, at no-one’s beck and call. It’s the modern day equivalent for me of Virginia Woolf’s room of one’s own.

Life isn’t risk-free. But if I am ever attacked, I refuse to accept any blame. There’s nothing that makes climbing mountains particularly attractive to a man looking to molest women, and we know that statistically men are far more likely to be attacked by a stranger anywhere, but that doesn’t stop the myths and the climate of victim-blaming fear often created by patriarchy in the press or police/judiciary.

If you see me on the fells or the moors, give me a smile. And get out there, girls. It’s your territory too!