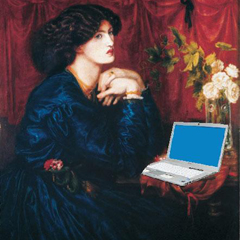 This month has seen the seventeenth anniversary of a landmark in women’s journalism: The Scotswoman. Frustrated with working in such a male-dominated profession, Scotsman deputy editor Lesley Riddoch suggested that the paper should mark International Women’s Day by sending all the men home, and producing a special edition of the daily broadsheet that was entirely written by women. But nearly two decades on, women are still under-represented in many aspects of the media. Over the past year, feminists have used Twitter “diversity audits” to draw attention to how few women are appearing on current affairs programmes like Newsnight, Question Time, or Radio 4’s Today, and research by Guardian writer Kira Cochrane has shown that women are getting less than a quarter of the bylines in national newspapers.

The lack of female voices doesn’t just affect professional journalists and the mainstream media; women are noticeably in the minority amongst the online commentariat as well. As a woman who blogs on political issues, I was well aware of the gender imbalance, but was wary of commenting on it publicly in case I was accused of seeing a problem that didn’t exist – after all, there are a few women, like Laurie Penny, who’ve become famous for writing about politics. So, inspired by Kira Cochrane, I decided to gather my own statistics to find out how they compared with my own perception. The results were even more extreme than I had expected: some of the most popular left-wing blogs have around 90% of their content written by men.

Blogs are an increasingly important forum for political discussion. They can provide an alternative source of news and opinion, often without the kind of editorial restrictions found in the mainstream media. A well-written post can form opinions, and if it’s published in the right place, it could be read by thousands. But most of those who attract that amount of attention are men; women are under-represented at all levels, but particularly at the top. This means that women’s views aren’t being put across, either directly through opinion pieces, or indirectly through the choice of which issues are written about.

There’s such a shortage of women writing for the more high-profile political blogs, that even when a distinctly feminist issue makes the news – for example, the protests against Nadine Dorries’ abstinence education bill – it’s often male writers who are reporting and commenting on it. Although I’m usually in favour of men taking up the cause of gender equality, we shouldn’t have to rely on men to put this information across when we’re perfectly capable of speaking up for ourselves.

The defence that political blogs give for not publishing more articles by women is that they just can’t find female bloggers to write for them. There’s a perception that women aren’t interested in writing about politics, but anyone who spent half an hour browsing through feminist blogs would prove otherwise. Just look at the discussion that has developed over the last few months over welfare reform, reproductive rights, public sector employment. Look at the dissection of Louise Mensch’s statements on “blue feminism”. You’ll see a lot of intelligent, politically literate women, who know exactly what they’re talking about.

But feminist writing often isn’t counted as political – not by people who claim do “proper” politics anyway. This is at least partly because feminist discussions about politics take place in feminist spaces, where they aren’t acknowledged by the people involved in mainstream, male-dominated politics. While I’m fully supportive of the need for women-only spaces, I sometimes think if it would be helpful for more women to be politically active outside of feminist spaces as well. Not so that we can assimilate into male-dominated political culture, but so that we can bring our own perspectives to the debate.

This is easier said than done, particularly because most of us have been taught not to be “pushy”, or to draw attention to ourselves, but one of the nice things about the internet is that you can ignore social conventions. There’s safety in numbers too, and the more women join in, the easier it gets for all of us. So let’s talk tactics: how do we get more women blogging, and how do we make sure that they get recognition for it?

Alyson Macdonald lives in Edinburgh, where she is a mild-mannered admin worker by day, and a community activist and blogger by night. She is a co-editor at Bright Green.