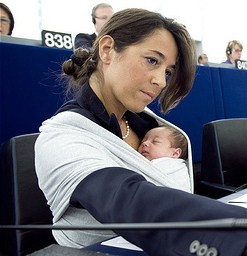 Putting mothers in their place

This is a guest post by Elizabeth Howard. Elizabeth has recently completed a PhD in contemporary women’s literature at the University of Leicester and is now enjoying planning her future as a general pain in patriarchy’s backside.

BBC Sussex’s twitter feed yesterday asked ‘Can Mums really expect careers? Is it fair on the kids? Or is it your right?’, highlighting the continuing and harmful cultural expectation that women should be predominantly responsible for childcare. Aside from the offensive assertion that working mothers are somehow being ‘unfair’ to their children, BBC Sussex’s apparent inability to recognise that many children have stay-at-home fathers while their mothers pursue a career outside the home suggests that the censure of working parents relates only to women.

Such stereotyping reflects an underlying assumption that appears to be reinforced on a governmental level. Parental leave entitlements in the UK are the most inequitable in Europe, with paternity leave offered at a rate of only two weeks statutory pay, as opposed to six weeks at 90% pay followed by a further thirty three weeks at statutory pay or 90% pay and thirteen weeks unpaid for mothers. While recent steps to increase maternity pay are commendable, the ongoing emphasis on female responsibility for childcare is deeply damaging, both to women and to children. Feminist classics such as Marilyn French’s The Women’s Room and Charlotte Perkins Gilman’s The Yellow Wallpaper outline in searing detail the ramifications to both mother and child when women are forced into patriarchal models of the ‘perfect’ mother.

While I in no way intend to criticise any mother (or father) who chooses to become a stay-at-home parent, the rigid insistence upon female responsibility for childrearing inherent in our parental leave system reinforces a destructive pattern of familial relationships that women have long fought to overcome. Betty Friedan’s The Feminine Mystique showed that such relationships, in which women are allowed to find meaning only through their husbands and children, leads to deep psychological dissatisfaction for many women. That such models remain ideologically intact nearly fifty years later is astonishing; that it is women themselves who promote such detrimental models, a cause of deep concern.

As a woman who has fought to overcome social and economic disadvantages to pursue a career I find the idea that I, as a woman, should automatically jettison my intellectual ambitions if I want to also become a mother as intolerable as Friedan suggests. Furthermore, it would be economically disadvantageous for me to do so – another point that BBC Sussex’s question overlooks. Many women simply do not have the economic luxury of choosing to become stay-at-home mothers.

Yet BBC Sussex is simply reflecting a growing movement which turns its back on the advances of the last forty or fifty years, instead reifying a romantic ‘ideal’ of motherhood as the ultimate fulfilment of female purpose and in which women who do not have children or do but choose to work are condemned as ‘unnatural’. Although simply questioning the rights of mothers to work does not reflect this view overall, the fact that only women are mentioned betrays an underlying view that parenting (along with associated concerns such as birth choices and availability or schooling options) is solely a ‘women’s issue’ .

This insistence upon viewing childrearing as an inherently female concern is tied to essentialist notions of women as natural nurturers, traditionally used to exclude female involvement in the ‘masculine’ public and political spheres. The glorification of female self-sacrifice inherent in such views should therefore be rightly condemned as sexist suppression of female potential. Women are no more psychologically ‘suited’ to domestic tasks than men, men no more naturally inclined towards intellectual pursuits than women. Yet we continue to be fed these same tired stereotypes, often by the very people who have overcome gender barriers themselves, presumably like many of the staff of BBC Sussex itself, and ignore the fact that not everyone has the choice to do so.

I respect anyone’s choice to be a stay-at-home parent, yet the casual condemnation of the millions of women who choose to or have to work ignores the fact that the role some men and women find so fulfilling can also be injurious to anyone who is expected to do it simply on the basis of being female. I do not personally care how anyone chooses to order their home or how traditional or otherwise one chooses to be. I do care, however, when BBC Sussex uses those choices to diminish and restrict all women.