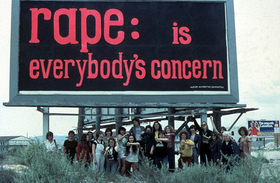 Ched Evans conviction: the vitriol after the verdict

Rape culture. It’s alive, well, and lurking in the bushes down a dark alleyway near you. In fact, closer: you might find it within your free newspaper, clogging up your twitter feed, or even lurking in the dark crevices of your own mind.

Rape culture is the name we give to an outlook which excuses, tolerates, or even condones sexual violence. For a thoroughly comprehensive definition, you can’t do better than Shakesville. And that is exactly what we’ve just seen in the response to the jailing of footballer Ched Evans for the rape of a nineteen year old woman.

I don’t know what happened on the night that Ched Evans decided to rape a drunk teenager. What I do know is that a jury which heard all the evidence accepted that he did so. Juries do not convict on a whim; prosecutors would say they can be frustratingly cautious to do so.

The topic began to trend on Twitter and the level of vitriol aimed at the victim was unbelievable. I Storified some of the tweets, and Little Tweets of Misogyny documented others (Trigger Warning).

There were tweets claiming that the woman was promiscuous and had slept with other people. That if she was so drunk, how do we know she didn’t consent? That she was a money-grabbing publicity-seeking bitch out to wreck a man’s life. Evans’ friend Connor Brown took to the net to call the victim a “money grabbing tramp“, adding

“If ur a slag ur a slag don’t try get money from being a slag (sic) … Stupid girls… I feel sick.”

This is rape culture. A culture in which a convicted rapist is described as “that poor man” and his imprisonment attracts sympathy, while the victim is treated as though her rape was her own fault, or, weirdly, as though she had orchestrated the attack on her for some supposed benefit.

Equally concerning were the men who apparently admitted rape.

sniggered one, ten minutes to closing time. And astonishingly from Albert Farnsworth IV

“If nailing a tramp who is too wankered to say no is a crime….. then the old bill need to get down to mine with a set of cuffs. #ChedEvans.”

Twitter is not a closed medium. If someone admitted to terrorism offences on Twitter, the Belmarsh doors would clang before you could say “joke!” but admitting to rape? Just banter.

Rape or attempted rape happens to (roughly) one in four women and (roughly) one in thirty three men. This has happened to someone you know – and yet it’s acceptable to propagate the view that victims are somehow to blame whereas rapists just made a slip-up, no more blameworthy than a spelling error: a typo of the penis, if you will.

Part of it is plain old-fashioned misogyny. Part of it can be found in a hypersexualised masculinity which dictates that “real” men are permanently, gaggingly up for it and that it is for the woman to keep her virtue intact. Part of it is that the rape culture can be something of a false safety blanket for women: if there are Things We Can Do to not-get-raped then we’re immune. As long as we remember to keep our keys held in our fists and avoid empty tube carriages then we’re safe and can conveniently ignore the fact that we’re far more likely to be attacked by an acquaintance in our own homes. The women on Twitter who are busy castigating the victim in this case for being a drunk, a slut, a bitch? They are naïvely clinging to a fiction which will desert them if they ever happen to meet a rapist.

It’s a vicious circle. Few attacks are reported; of those that are, only 6% end in conviction (although as Amanda Bancroft has pointed out, that rises to a more promising 58% for those which are charged). And that is because in deciding which cases to charge, the CPS must assess the prospects of success within the society we live in, not the one we would like.

It shouldn’t need saying, but clearly it does. This case has been a graphic illustration of that.