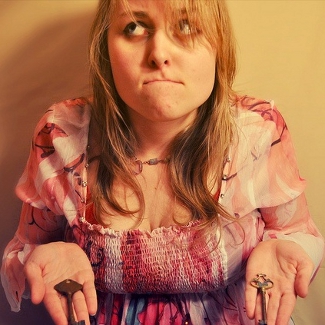 The homemaker or the sex doll; take your pick

Rhianna Goozee considers the underrepresention of different roles for women in mainstream media and the general lack of choice young girls have today when it comes to potential role models.

Pink sprinkled cupcakes, knitting on the way to work, sewing circles, decoupage, home preserves… It seems hobbies traditionally attributed to female homemakers or WI meetings are now trendy. I’ve seen teenage girls knitting on the tube, my not-yet-thirty sister is obsessed with cupcakes and everywhere I look floral patterned homeware abounds. The recent popularity of arts and crafts, baking and other activities has got me wondering what this all means for feminism. Are women also embracing the traditional role of homemaker or are they choosing these activities as a way of relaxing after a hard day at the office? It is possible to be a feminist and still embrace these hobbies? Are women now expected to live up to the image of a 1950s housewife, cooking, cleaning and bringing up the brood all without so much as a hair falling out of place in addition to having a career?

Whilst there has been a revival in the popularity of homely, wholesome hobbies worthy of the WI, the only other alternative to donning a floral pinny, a 1950s style cocktail dress and a docile, subservient smile seems to be to don stilettos, a bodycon dress and a pout. The hypersexualised looks of the women on shows such as Take Me Out and TOWIE appears to supply girls with the alternative to happy housewife… that of a human sex doll. These shows seem to take delight in exhibiting the women in all their fake tanned, big haired, made-up finery and simultaneously providing numerous opportunities to ridicule them for a lack of intelligence. Don’t get me wrong some of the women on Take Me Out are well-educated and have actual careers that they have probably worked very hard to achieve. But they are applauded and shown off as some sort of exception to a rule, whilst Paddy McGuinness pulls an amazed expression. “Wow, a woman who looks like THAT and she’s a DOCTOR? What a wonder woman! How surprising that someone could have both boobs and also a brain!”

This all leaves leave me wondering where all the other women are in the mainstream media: women who work in business, science, sport, education, politics or any other career that isn’t encompassed solely by a desire for fame. Where are the female fire-fighters, policewomen, doctors and nurses? These women do exist and every so often they might briefly show the potential to become a role model for young girls everywhere. They just don’t seem to have the same staying power of the celebrity, unless they appear to be joining the pouting masses and creating a new persona by attempting to look like Barbie. It seems in order to be admired for academic achievements or a successful career a woman must also be beautiful, immaculately turned out and stylish. The achievements alone are not worthy of praise.

I would like to clarify that I’m not saying women who choose to be housewives can’t be inspiring or strong women worthy of respect. My mother chose to devote her life to my siblings and me and she possesses innumerable qualities that I strive for (and on the odd occasion achieve); patience, unconditional love and selflessness amongst many others. I’m also not trying to suggest that women shouldn’t be allowed to dress up, be sexually liberated or take an interest in make-up. What I am lamenting is how underrepresented so many different women are and what a lack of choice young girls have today when looking for role models.

Picture shows a woman in a pink dress looking upwards to her right, with her mouth pinched in an expression of confusion. Her hands are outstretched and each contains a key. This is adapted from a creative commons image by kaili williams and the model in the picture is named as Rosalie.