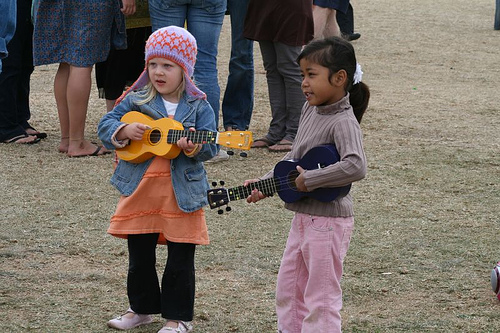 Music paste up: A stripped back saturday special, featuring Cold Specks, The Cornshed Sisters, Clean Bandit and She Makes War

Hello and welcome to Saturdays music paste up. There is something of a theme today in that I’m focusing on artists in stripped back mode, that is, those occasions when artists who usually make loud and/or more complex music have been performing acoustically, or perhaps performing songs that are naturally stripped back in nature. This seemed to be a developing theme as I selected clips and artists so it seemed worth highlighting it.

First up, London singer/songwriter Laura Kidd, aka She Makes War did a whistlestop tour of London offices on March 22 to raise money for Water Aid. A novel concept, the short documentary of the days events reveals Kidd to be a brave and resourceful performer who comes across as unpretentious and likeable.

Her new album, Little Battles will be released on April 11, and Laura will be celebrating by playing at Half Moon – Herne Hall in London. Laura will also be supporting Chris T-T on tour throughout April and May, and dates are as follows:

For more info, see the She Makes War website.

Another band on tour in April are The Cornshed Sisters, whose debut album, Tell Tales, is released on April 9. Review to follow shortly.

You can download and stream the first three tracks on the album (Dresden, The Beekeeper and Dance At My Wedding) here:

The Sunderland based vocal harmony group will be appearing at the following venues:

13 April, Manchester, College of Music with The Futureheads (Acappella)

The band will also be appearing at The Cornshed Festival in North Yorkshire on 6 July.

New singer/songwriter Cold Specks has already caught the eye of Jools Holland and featured in The Big Issue. Her debut album I predict a graceful expulsion will be released on May 21. There isn’t much else to say really at this stage other than to remark on the amazing quality of her voice. Her appearance on Later was acoustic and, in at least one instance, acapella, and the result was stark and arresting. I await her album with great interest.

A different kind of stark and stripped back is this low key track by Clean Bandit. Part two of video footage of the bands recent session for Radio One, ‘Birch’ reveals a subtler aspect to the bands usually complex sound.

You can listen to the bands current ep, UK Shanty over on Soundcloud.

I want to end this post with a bit of cool European glamour in the Nico vein.

This is ‘Voyage, Voyage’ by Soap&Skin, which is due to be released on April 23. It’s a cover of the 80s synth pop song by Desireless

The filmic feel of the video makes more sense if you know that it incorporates scenes from Anja Plaschg’s (aka: Soap&Skin)debut film appearance in Stilleben (Still Life), an Austrian film which also features music from her new album Narrow.

Plaschg’s 2009 debut Lovetune for Vacuum entirely passed me by, but I will be checking her out on the strength of this track.

Soap&Skin will be headlining at London’s La Scala on 11 April. Not sure if tickets have sold out, but it’s probably worth trying to find out.