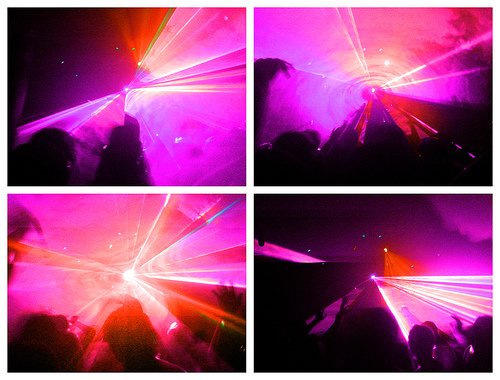 My experiences of commercial clubbing and hyper-femininity

I’ve come to find that the culture of mainstream clubbing (by mainstream I refer to clubs that plays mainly chart music and RnB with a bit of club classics, serving the purpose of heavy drinking and one night stands, on girls’ and lads’ nights out) propels hypersexual, super-glossy images of women. Forgive me if this is nothing new to you.

I do not want to, or mean to, undermine individuals’ decisions on how to spend their Saturday night after a weeklong slog. But you can tell a lot about the current state of a society from what goes on in its clubs and by which clubs are popular. My experiences are mainly from clubbing in London and the south of England.

I go to a mainstream, straight club for a girls’ night out once or twice a year and the rest of the time to club nights that are centred on certain types of electronic music, where I wear my Dr. Martins, never need or want to dress up, very rarely get groped, start a fight, or have a half-naked woman gyrating in my face. However, both types of clubbing fulfil certain desires: to dance, get wasted and stay out all night.

Before going out on a typical girls’ night out, generally the ritual is to buy a new outfit and spend about two hours getting ready, creating a hyper-feminine, photo-shoot look, showing as much skin as possible. (The TV show Take Me Out presents a heightened version of this ritual.)

Why do hordes of women make up their bodies like this every weekend? When I chatted briefly to some of my co-clubbers they said: “I do not feel confident without it” and “it makes me feel sexy” or “I don’t really think about it.” Is there an expectation that you won’t pull if you don’t dress like an airbrushed picture of Cheryl Cole?

I understand that heterosexual feminine and masculine gender binaries exist in the commercial clubbing scene and that people go out to have a one-night stand. I’ve had a phase of it in my life. But from my experience, the pressure is on women, who are come-on-to with their bodies openly discussed and touched. Often, if you do not conform to the sleazy conversations, or if you challenge being groped, you are faced with anger or accused of being a prude. Once in Shoreditch I almost came to blows with a guy who told me I should take his mate’s arse grabbing as a compliment. The men who do this seem to think they have ownership over the bodies on display to them. 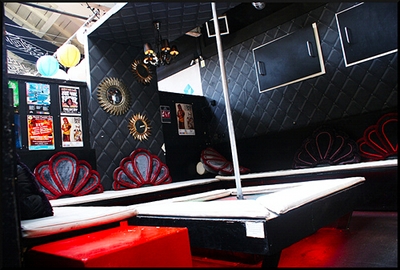 Recently I was at Proud in Camden for a friend’s birthday. The club is set out in old stables and some of these ‘booths’ have poles in them. I was getting a drink when a group of five female dancers wearing underwear got up on the bar and danced provocatively, pouring champagne down the throat of anyone who wanted it, while men drooled and took pictures of their bums and cleavages. It was as if we were in a lap-dancing club with lads around me hooting. This didn’t faze anyone around me but, feeling uncomfortable, I left.

Proud’s website describes it as a gig/bar venue. Do they do that on purpose to uphold some kind of ‘classy’ reputation? It’s like they know it’s not PC but they do it anyway because it’s going to pull in a huge amount of lads. In a place that has sold itself as retaining “many of the beautiful and genuine features, including the original stables that once housed the horses that were injured pulling canal barges”. It seems absurd that they would then place poles in the middle of the drinking areas.

When did this Nuts magazine aesthetic become so normalised in pop clubs? I’ve also heard of the Nuts mag club nights where women get up onstage and are judged on how much of their clothing they can take off. I pass at least three lap dancing clubs on my four mile cycle home. Isn’t it enough that there are lap dancing clubs all over London (and the rest of the UK)? And a Playboy club to cater for men who want a stripper?

I go on these nights to dance, chat, and have fun, but I would like to do it with a bit of freedom – without the pressure of the male gaze or the worry of being groped.

I am aware that this is a basic overview of this subject, which I am currently delving deeper in to. Also I have not given much of a voice to the people that I have talked about. Perhaps more to come in later posts…