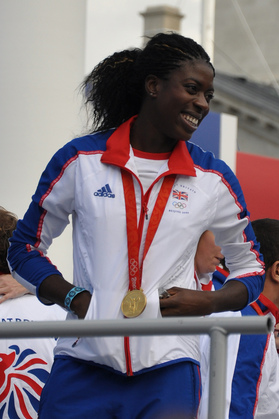 Britain’s hosting the Olympics this year! Had you noticed?

If not, I can only imagine you don’t read newspapers, watch television, go to the cinema, and that you close your eyes every time you pass a billboard. The sponsors of the upcoming Olympics are apparently limitless, and all of our visual media have been flooded by sports-related advertising. This was kicked off a few months ago by The Sun, whose advertisement showed us a range of people from all walks of life running in an Olympics-style race, while Nigel Havers reads their paper on the beach. Of course, I say “people from all walks of life”, because this is what I imagine The Sun think they’re portraying. In fact what’s shown in the advert is that Men have Important Jobs, while Women are Mums, Children or Fun Runners in Hen Night Gear.

This advert was closely followed by others. Stand out ones in my mind are from Visa, BMW and BT Infinity. Seen these adverts? Noticed anything about them? Let me give you a clue. Women don’t do sport.

Watch any Olympics-related advertisement. Women don’t do sport. Although Panasonic just reminded me, women can do gymnastics. We’re quite good at springing about looking pretty, with nary a pubic hair out of place. Just not the other sports – the running and jumping and swimming and cycling and shooting, and all those other terribly exerting sports. We don’t want our women doing those. They might hurt themselves. Or look a bit sweaty.

Considering the last few months of testosterone fuelled sports advertising, I beamed at my TV last night when I finally saw an advert that featured the full variety of women that will be bringing home Britain’s medals. The smile melted from my face as it reached its conclusion, however: this was an Ariel washing powder advert. The only reason sportswomen were on my screen is because their highest priority is doing the laundry. I don’t suppose I could have expected any better from Proctor & Gamble, who Proudly Sponsor Mums.

Well, sponsors of the Olympics, I have some news for you. At the last Olympics in Beijing, Great Britain won 47 medals. 20 of these were won by women. And these medals weren’t just in the ‘girly’ sports that we like to think of as the women’s fodder. Our Olympians won at cycling, swimming sailing and, my personal favourite, Taekwondo. Women won 43% of the British medals, in our best Olympic performance in a century. This shouldn’t be surprising, considering we make up a little over half the population.

Except that there are other factors to take into account. Like how poorly funded many women’s sports are. For example, Britain’s best chance at a British competitor in rhythmic gymnastics has to travel from Northampton to Birmingham to be able to train with the right facilities. Media attention is another big problem, as demonstrated by the Women’s Super League players, who have resorted to wearing their Twitter tags on their sleeves in order to get some publicity. It should probably be mentioned that, based on recent form, the women’s GB football team are far more likely to bag a medal than the men’s.

Even at grass roots level, there are serious problems with women’s sport in Britain. Being the potential athlete I am (or might be, the day they make Roller Derby an Olympic sport) I recently went to my local JD Sports. I wanted to buy some black kit and a new mouth guard. Disappointingly, the women’s section consisted of a corner of pink jogging gear and yoga mats. It was small enough that the sales assistant felt obliged to apologise. I walked out without a black vest or shorts, and without a mouth guard. And I won’t be going back.

Perhaps it’s no wonder then, with a poor availability of kit at the beginners’ level, and a painful lack of funding and media coverage at professional levels, that women’s sport is so overlooked. But this is the Olympics. And some of our best Olympians come from more niche sports, such as judo, shooting and rowing. We should be celebrating this. The sponsors of our Olympic games (because let’s remember, tax payers, just how much of these Games are publicly funded) should be channelling both money and attention where it’s so badly needed.

[The image is a photograph of Christine Ohuruogu, who won a gold medal for Britain in the women’s 400m at the Beijing Olympics. It was taken by Nick J. Webb and is used under a Creative Commons Licence]