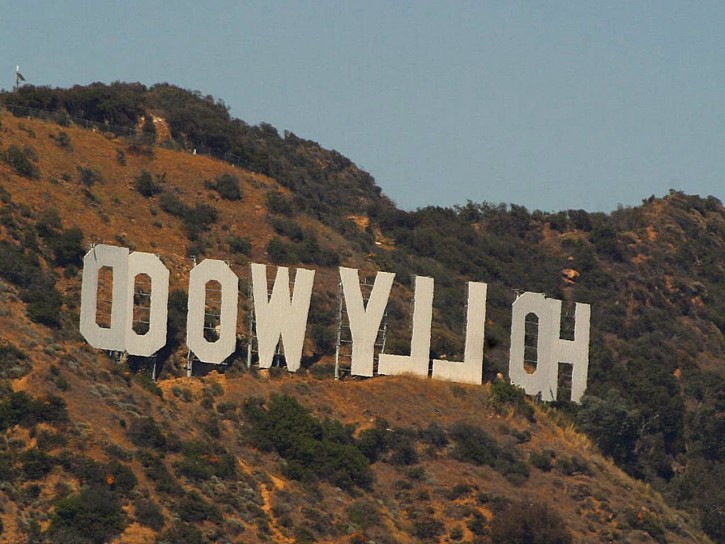 The image is a photograph of the Hollywood sign seen in mirror-image reverse from Griffith Park, Los Angeles. It was taken by Jon Sullivan and is in the public domain.

As you’ve probably heard, Ashley Judd recently wrote a very well-received piece on the pressure on women to conform to beauty norms. My first reaction, before having read it, was “Celeb states the obvious, gets cookies for it.” Very judgy, considering I hadn’t even read it. Then I read the piece and was fairly impressed; then felt a bit guilty for being impressed mainly because I didn’t expect a Hollywood actor to write something like that. (The piece stands on its own as being decent, but other feminists have been saying the same thing, and have layered more dimensions to this issue, for ages. No one’s fawning over them.)

And now I’m back to feeling troubled by problematic aspects of the piece. There are some very excellent things in it. Judd points out the adversarial framing of interactions between women, and the impossible catch-22 where women get criticised when we don’t take pains to look conventionally attractive and when we do. She honestly acknowledges that she “internalized patriarchy almost seamlessly” and she’s right to caution against it.

But what does this critique mean in the context of the writer having been (and continuing to be) part of the Hollywood machine? I have really mixed feelings about this. I don’t think that to be feminist you must “unemploy” yourself from your problematic industry. (I work in an industry that really piles on the gender essentialism in marketing, for example, credit cards for “ladies”.) Judd doesn’t have to quit Hollywood to prove her feminist chops, but it’s troubling that she doesn’t acknowledge in this piece how she’s benefited from her conventional attractiveness and whiteness, nor how much Hollywood perpetuates lookism and the scrutiny of female-bodied people’s appearance, size, behaviour, etc.

Judd is entitled to give a big middle finger to the people and news outlets that commented negatively on her personal appearance. But the fact of scrutiny on female bodies is just one face of the problem. What are our bodies being scrutinised in comparison to? Judd is strangely silent on how her personal appearance, on its “good days”, is part of the beauty standards that are impossible for 99% of us, mainly because we’re not born white, non-disabled, or genetically predisposed to be a certain size. And also because we don’t have an army of people working to tend to our looks and wardrobe at professional appearances, nor do we have the benefit of professional digital alteration in our photographs. She’s saying, “What I look like on a bad day is none of your business.” I have to use my imagination to expand that to “What I look like on a good day is setting impossible standards for others who don’t have the time, money, genes or inclination.” She doesn’t have sole responsibility for this, but this silence speaks of something.

This is something all women negotiate, whether or not we like it or are even consciously aware of it. As long as the arbitrary and exclusionary Hollywood beauty standards exist, how much Shu Uemura I put on my face in the morning is necessarily a political decision. (Getting to the age and organisational rank where showing up with no face-cake will not elicit comments of “You look really tired” or “You should use some foundation; let me recommend a brand” feels really liberating. But it’s achieved through moving up the power gradient in the patriarchy, so it’s not true liberation.)

But she also says: “It is subtle, insidious, and never more dangerous than when women passionately deny that they themselves are engaging in it.” This is way, way off.

There are numerous flavours of blaming women for misogyny. There’s “misogyny exists because you women are the worst to each other because you’re naturally malicious and jealous and competitive with each other.” As if the patriarchy has not created and propped up this adversarial view of interactions between women, where we’re apparently all hetero ladies competing for the approval of hetero men.

There’s “misogyny exists because you women are asking for it by being inferior just because you’re women.” Such as “scientific research” into sex differences used to justify the gender wage gap as a result of women not having interest in the professions with high pay, or women just not being as good as men in those professions we do choose (a word I use with caution). And yes, I know there are sex-difference writers who are female. But I wouldn’t single them out as being worse than the male writers.

How about “misogyny exists because you women choose to let men continue exploiting you”? E.g. “Why do you groom yourself to be sexually arousing to hetero men?” “Why do you say no to sex when you mean yes?” “Why didn’t you leave when your partner/spouse abused you?” “Why do you act so girly and weak?” As if “choice” is that simple in the context of patriarchy, which is omnipresent and has a very efficient social conditioning component. As if exploitation will end if the exploited act differently. But power doesn’t work that way. If women all magically decided to behave differently, ceteris paribus, that new behaviour will then be coded inferior because it’s associated with women. This argument also assumes those who exploit have no obligation to choose to stop exploiting, as long as the opportunities exist.

As the plain vanilla amongst all these flavours of woman-hating, Judd’s point is really quite tame. It’s also not really her fault that people seize upon that one quote out of all the other things she wrote and focused on that. It’s not her fault that the MRAs (men’s rights activists) will take this and run with it. I’ve also been told that the essay has become popular with women ‘who think feminism is boring/”excessive”‘, and I don’t know what to make of that, but again, it’s not Judd’s doing. Incidentally, I have nothing but contempt for one particular response which was basically “Ashley Judd! So many words! Tl;dr! Also one time Jason Patric said she was lazy! Therefore point invalidated, QED.” I will fistfight anyone whose sole basis for criticising a woman is that she talks too much.

I’m aware that there’s a tendency to criticise women more harshly than men — and I see the irony in the fact that I may be disproportionately vexed over Judd’s essay for putting disproportionate focus on female misogyny… this is an endless hall of mirrors that is probably ultimately unproductive. So I’ll end on this note: Judd is right in the sense that, yes, women do sometimes demean other women, and that yes, that is harmful to us all. But to make that the focus of criticism and maintain silence on male misogynists will ensure that we will never, ever crack this problem.