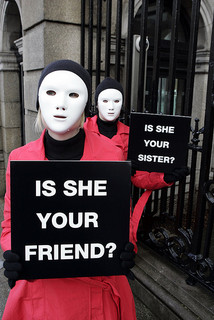 The benefits system is being overhauled – we’ve covered some of the impacts of this already. But one aspect that has gone almost unreported so far is the impact of the changes on how domestic violence refuges are funded.

I have a feature in Inside Housing (my day job!) today, which breaks down what is happening and why.

Some of the changes are directly going to make things more risky for actual victims, as well as the services such as refuges. From next year, for example, a new system is being introduced called universal credit – which will bundle together all sorts of benefits in one, monthly lump sum.

If you are in a couple, both of your benefits will be combined and paid to one of you (with a small number of exceptions). Even for otherwise solid relationships, this is problematic, but the impact for those stuck in abusive relationships should be obvious.

Things are tougher all around – and we also have a front page story today that is about how councils treat women who approach them as homeless as a result of domestic violence. It is now also common for it to take weeks to get a woman into a refuge, where a few days used to be the maximum.

The Scarlet Centre, which is a pan-London service for women experiencing domestic violence, has seen a rise in cases of women being turned away by the homeless persons unit at London councils. Once a week, they are having to get solicitors involved before the councils carry out their basic duties.

Many of the solicitors and domestic violence workers I spoke to put this down to pressure on councils’ resources (if they carry out an assessment and find that someone is homeless, or at threat of homelessness, because of domestic violence, they have a duty to put them into temporary housing, while they carry out an investigation into the case. They may then have a duty to provide permanent housing – and there is a shortage of this.)

But a lack of training and myths about domestic violence are also most likely playing a role in this. Vera Baird QC (who was Attorney-General under Labour), had some thoughts on this as well. ‘I don’t think housing officers are hard-faced people at all. I think it’s lack of training or knowledge,’ she told me.

Overall, this is not a pretty picture. And there’s a whole raft of issues that I didn’t have room to get into – such as the cuts to legal aid, which also have people worried, and cuts to translation services which are crucial if you are escaping a relationship and don’t speak English.

What is the answer? It seems like issues such as domestic violence have slipped down the political agenda. If we can expose what’s going on, can we reverse this?

Photo by CWGL, shared on Flickr under a Creative Commons license