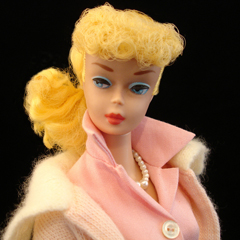 Elin Weiss &amp; Hennie Weiss consider the trend for some younger women to make themselves look like Barbie dolls.

First recorded as popular in Japan, a new trend for young girls all over the world is hitting youtube: to look like a Barbie doll.

The trend consists of applying makeup, doing one’s hair, and dress in ways as to resemble a Barbie doll. Young girls and women are posting videos of themselves on youtube in which they give advice on how to apply makeup and how to do their hair in order to look like Barbie dolls. This trend has apparently taken off and is becoming quite popular with certain girls being seen as the ‘better Barbie’ or more ‘popular Barbie’.

There are also websites dedicated to teaching girls how to look like Barbie and tips on how to take care of one’s body and hair in order to look more like the plastic doll. When searching the Internet it is easy for girls to find tutorials on how to master the look of Barbie and how to create ‘Barbie hair’ and how to achieve a ‘Barbie face’.

It is troubling that young girls aspire to look like Barbie dolls. First off, we all know how much criticism the Barbie dolls have received for their anatomically incorrect and impossibly super slim bodies. Secondly, Barbie has also received criticism for promoting unhealthy body ideals and influencing young girls into believing that the Barbie body is common and attainable and more attractive than their own. This is a troubling thought since, according to a news article in the Huff Post, Barbie’s height (if she was a living woman) would be 5’9″ tall, with and bust of 39″, a waist that is 33″, while she would wear a size 3 in shoes. Barbie would then weigh 110 lbs with a BMI of 16.24, which lands her in the BMI range of anorexic. Due to her anatomically incorrect body Barbie would have to walk on all fours. The same news article also stated that: “Slumber Party Barbie was introduced in 1965 and came with a bathroom scale permanently set at 110 lbs with a book entitled “How to Lose Weight” with directions inside stating simply ‘Don’t eat'”.

One might think that young girls understand that Barbie’s looks are unattainable and unrealistic, but do they really? This is not always the case. Some girls grow up to idolise Barbie to the point where they try to emulate her looks completely. Three real life examples are UK women Sarah Burge and Charlotte Hothman, as well as American Cindy Jackson. Burge had more than 100 cosmetic surgeries in order to look like a human Barbie doll. Hothman has spent over £10,000, while Jackson spent more than $100,000 on cosmetic surgery. All three women stated that their obsession with the Barbie doll started when they were young girls, and that they have always wanted to look just like Barbie.

It is quite disturbing that this trend has surfaced among very young girls. It appears as if the obsession with appearance in young girls is getting more and more severe, especially now when some girls are attempting to attain a specific body weight and size that is constructed for nonhuman objects. It does seem as if the obsession with a certain appearance is indeed reaching younger and younger girls. It is important to care for one’s health but an excessive fixation with one’s appearance does seem unhealthy in regards to the expectations placed on these young girls. Since no person is perfect (and what is perfection anyway?) this type of fixation with beauty can probably only lead to unhappiness and body dissatisfaction in the long run.

There is tremendous diversity in terms of body size, shape, height, and overall appearance among women. Some women are naturally very slim, some are very curvy, some have large breasts, some have smaller breasts, some are short and some are tall. In short, there is no limit to the ways that women look. What the Barbie ideal is perpetuating, however, is one type of body, one that is anatomically impossible, and one that is anorexic. Idealising the body of Barbie also trivialises and glorifies the eating disorder anorexia, a disorder that millions of girls and women suffer from, and that many also die from.

It seems that the obsession with appearance and a certain type of beauty has gone so far as to now include the fixation with impossible to reach and inhuman beauty. Now more so than ever, young girls are on diets and are very unhappy about their body size and appearance. Many of these young girls are being taught that appearance and beauty is more important than any other characteristic or trait.

We find it inappropriate that young girls are being displayed this way on youtube (even if they post these videos themselves) and we do believe that this new trend is damaging to young girls’ self-esteem and body image since it promotes a distorted idealisation of the female body while perpetuating the notion that one’s body is never good enough. Young girls should not be compared to dolls. Seeing the above facts make it even more disturbing that Barbie serves as the perfect ideal when it comes to girls and women’s appearance.

The image FAVE #850 Barbie blonde #8 Ponytail (1964-1965) is from Tinker*Tailor loves Lalka’s Flickr photostream and is used under the terms of the Creative Commons Attribution-NonCommercial 2.0 Generic license.