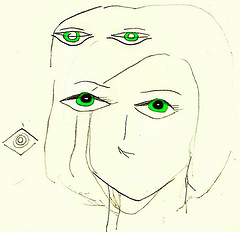 What Samantha Brick should have written

Although Samantha Brick’s article was almost certainly just a hilarious piece of trolling by the Daily Mail, the premise itself – that sexual jealousy between women is a serious, nasty problem – is a conversation conspicuous by its absence from feminist discourse. Is it because it feels dangerous for feminists to admit the element of truth in this particular stereotype, because it’s so often used to justify sexism? Is it because feeling bound up in jealousies of other women is, like most sexism, something that hurts non-feminists so much more than it hurts feminists, so it’s easily forgotten? Or perhaps we are just too ashamed, or too proud, to talk about it. But Laura Davis, writing about Samantha Brick’s article in the Independent, says “everybody agrees” that it’s a problem. She’s right. And we need to talk about it.

Female jealousy isn’t just a myth dreamed up by a man having a pillow-fight fantasy. It is one of the biggest roadblocks to women challenging sexism from a united front. I’m a feminist, but you know what? Sometimes I feel threatened, very threatened, by other women. I’m disgusted at myself for it, but sometimes, especially when I’ve been hurt or heartbroken, I feel so threatened I catch myself calling other women sluts, or bitches, or whores, in my head. That’s not because I’m a hateful misogynist. It’s just what misogyny does to weaker women, like me, if we’re not careful.

A few months ago I wrote a blog post about how inspired I was by Jodie Marsh’s anti-bullying documentary. I still got comments from men calling me a hypocrite because apparently feminists say we want choice for women but then we always judge women like Jodie Marsh, because we’re all jealous. Commentators on the internet are notoriously bad for not actually reading the article before letting their rage rip in a comment below the line, but to not even get to the end of the headline? It seemed to be a very clear example of how sexist men, on witnessing female solidarity, immediately feel an instinctive need to pitch women against each other, even in the face of all rationality or evidence.

So female jealousy exists, but what drives it? How often are we taught to be jealous of women for their talent at maths, or their hockey medals, or their civil engineering skills? We’re not. We’re only taught to envy things that prove beneficial to men.

We are taught, every day, in magazines, news stories, adverts and films, to see ourselves and each other as two-dimensional dolls in a false patriarchal dichotomy. What type of girl are you? Because, the adverts whisper, your husband secretly wants another type. Are you the wife type? Or the affair type? Are you a woman with a good career, to be respected, or do you enjoy anal sex and glamour modelling? You see, you can’t deserve love and be good at sex. Jennifer Aniston and Angelina Jolie are two of the most successful women in the world. Both have been married and both have been massive sex icons. But the media narrative tells us that one is the wife, and one is the sexy other woman.

The media’s endless limited dichotomy about the roles of women forces us to see ourselves as caricatures of the sort of woman we are – and as a consequence, we see other women as caricatures of the sort of women we are not. In a world where women can only ever be one thing, but are simultaneously told that we must be everything, all at once, it is no surprise that so many of us feel we have a choice: tear ourselves to pieces, or do it to each other.

This isn’t to say the divisions between women are all men’s fault. The narrative we are pitched in the media doesn’t exactly make men look good, either. Men cheat, men lie, men rampantly have sex with anything that moves against their will, men can’t be expected to say no to sex – ever, men don’t value love, only sex… the list of misandric assumptions goes on. But it’s because women are taught we have no choice but to passively accept these qualities in men because it’s just “how things are”, biologically, that so many women believe we also have no choice but to take it up with other women when we are treated badly by men, instead of with men themselves.

Perhaps female jealousy is just the outward expression of all the hatred we learn religiously to turn inward on ourselves. When we pretend it doesn’t exist, it divides us. But if we talk about it, it can unite us. Perhaps the very thing used to justify sexism is, when you look at it sideways, evidence that deep down even Daily Mail columnists are fed up of it.

Image by J-Urban-Hippie, shared under a Creative Commons licence.