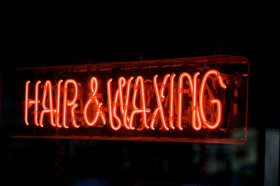 Am I not a feminist at all?

This is a guest post by Nicky Clark. Nicky is a parent, a carer and a disability rights campaigner.

Hair – and the presence or absence of it – is widely regarded as a feminist issue, along with many other aspects of slavish adherance to the dictates of the Glitterati. The edict from on high is that true feminists dare to bare hair.

The theory, I gather, is that the patriarchy are oppressing us and rendering us incapable of independence of thought- it places the intractable certainty in our brains through stereotypical conditioning that we are repellent in our natural state. I disagree. I just don’t like being a “hairy Mary”.

What is the point of the fights we’ve had thus far in striving for equality, or striving to be taken seriously, or striving to be listened to, if all we have to say is, “Stop being brainwashed and do what I say”? Caitlin Moran may sport hair in her bikini region, so abundant that it stands a good chance of winning a Rolf Harris look-a-like competion. It may sing “Two Little Boys” for all I care, but am I breaking one of the ten Morandments and failing the sisterhood by thinking, “Up to you, lovely, but I’d prefer a bikini wax”?

Am I not a feminist at all? I dunno.

What I do know is that I am is sick to fucking death of the bullshit of absolute adherance to latest notion of what makes a feminist and what doesn’t. To me, the only real value lies in the realisation and grasping of choice. Be untouched by beauty therapists hands, great! Be a salon frequenter, fab! But do it because it’s what you want to do, not because some zeitgeist has you reeling from the fear of failing to be on message. Because the message changes.

If choosing to wax or shave makes me less able to articulate my views, less of a role model to my daughters – because it somehow bypasses my neurological circuitry and takes me straight to patriarchy jail – then what the fuck is that about? How does having armpit hair on view, against my will, make me less brainwashed and malleable?

I love women. They have been my strength and my support network for 45 years. I love being a woman and a mother and a friend. I’ve also loved being a wife for all it’s fluid state as with any relationship and a housewife. I saw someone on Twitter the other day laughingly equating Laurie Penny’s feminism with a cupcake in a housewife’s kitchen. When I suggested that the cupcake could have been baked in a feminist kitchen with the words, “I’m a cupcake undefined by my circumstance”, the woman writer and her feminist mate called me a cunt. Interesting.

Maybe by their standards I’m not a feminist because I’m a housewife, but when you’re a carer for 3 disabled people the career ladder doesn’t beckon in the same way. When I had my girls in a small town there was a little frowning at the lack of a wedding ring. Fuck that. When men argue with me on twitter and I argue back in kind, just to be called aggressive, fuck that too. As I age and see the response that the unbotoxed, greying, wrinkled invisibility of a woman of a certain age yields from the media, fuck that even more. The beauty that my Mum exuded at 77, dying from the ravages of Alzheimers, was as undimished as ever because it stemmed from the gentleness of the spirit she possessed as much as it did from the bone structure her DNA provided.

Hair or bare, it’s up to you. Just be who you want to be, look as you wish and let neither the patriarchy nor the sisterhood tell you differently.

[The image is a photograph of a red, fluorescent sign reading “Hair & Waxing” against a dark background. It was taken by Jeremy Brooks and is used under a Creative Commons Licence]