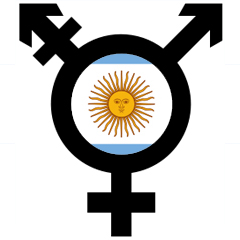 Via Mauro Cabral, Co-Director of the Argentinian branch of GATE (Global Action for Trans* Equality) I learn that the country’s Senate yesterday (9 May 2012) unanimously approved a gender identity law that doesn’t require a medical diagnosis in order to gain legal recognition, hormonal treatment and/or surgical procedures (including hormones and surgeries carried out in the public health system) and that doesn’t require medical intervention as a condition of legal recognition.

It’s a law grounded in the right to identity, establishing informed consent as the best practice for trans* access to health.

It seems likely there will be a short delay for the legislation to be formally enacted by Presidente Cristina Fernández before it actually becomes law, but it’s hoped that it will be practically implemented soon after that.

The significance of this change cannot be understated – the linking of trans* people’s medical and legal statuses is an area of trans* rights which has long been believed to cause more problems for many trans* people than it solves, both in accessing healthcare and obtaining legal recognition, and it is to be hoped that other countries will follow Argentina’s example in supporting trans* people’s rights.